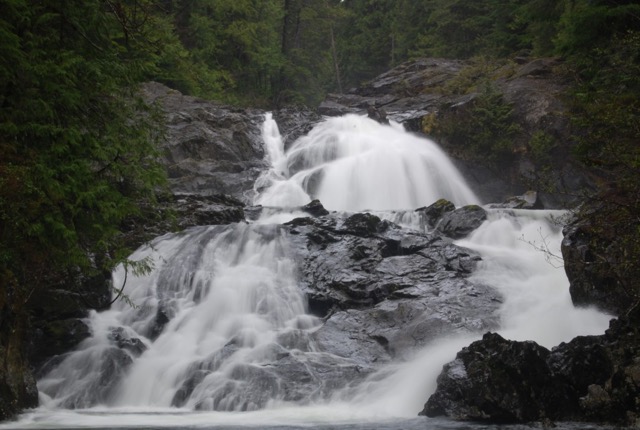 Far from a gurgling creek, this expansive system divides the steep east and west faces of the Walbran Valley; situated upstream from both the protected Carmanah Walbran Provincial Park and the world-renowned Pacific Rim National Park. The Walbran River meanders its way through the eastern portion of the provincial park, until it flows into the Pacific Ocean at the West Coast Trail.

The Walbran Creek bridge was ground zero during BC's 'war of the woods' over 20 years ago and is a place where activists, recreationalists and tourists alike stand in awe of the immense beauty of this wild, untamed world. Logging on the sheer slopes directly above the Walbran River increases the risk of soil erosion, leading to sedimentation and turbidity in the waters below. These waters are teeming with several species of fish, including coastal cutthroat and rainbow trout, steelhead, Kokanee, and coho salmon.

During the fall, endangered Sockeye salmon were spotted in a pool below a magnificent waterfall, which attracted the interest of fisheries biologists to the Walbran. While the old-growth forests downstream are protected within the Walbran/Carmanah Provincial Park, the Walbran Valley remains vulnerable to the potential impacts of commercial logging.

It was here, watching the water tumble beneath my feet, that I realized that water knows no bounds. Environmental policy must incorporate an ecosystem-based approach to managing our precious water resources.
Tweet