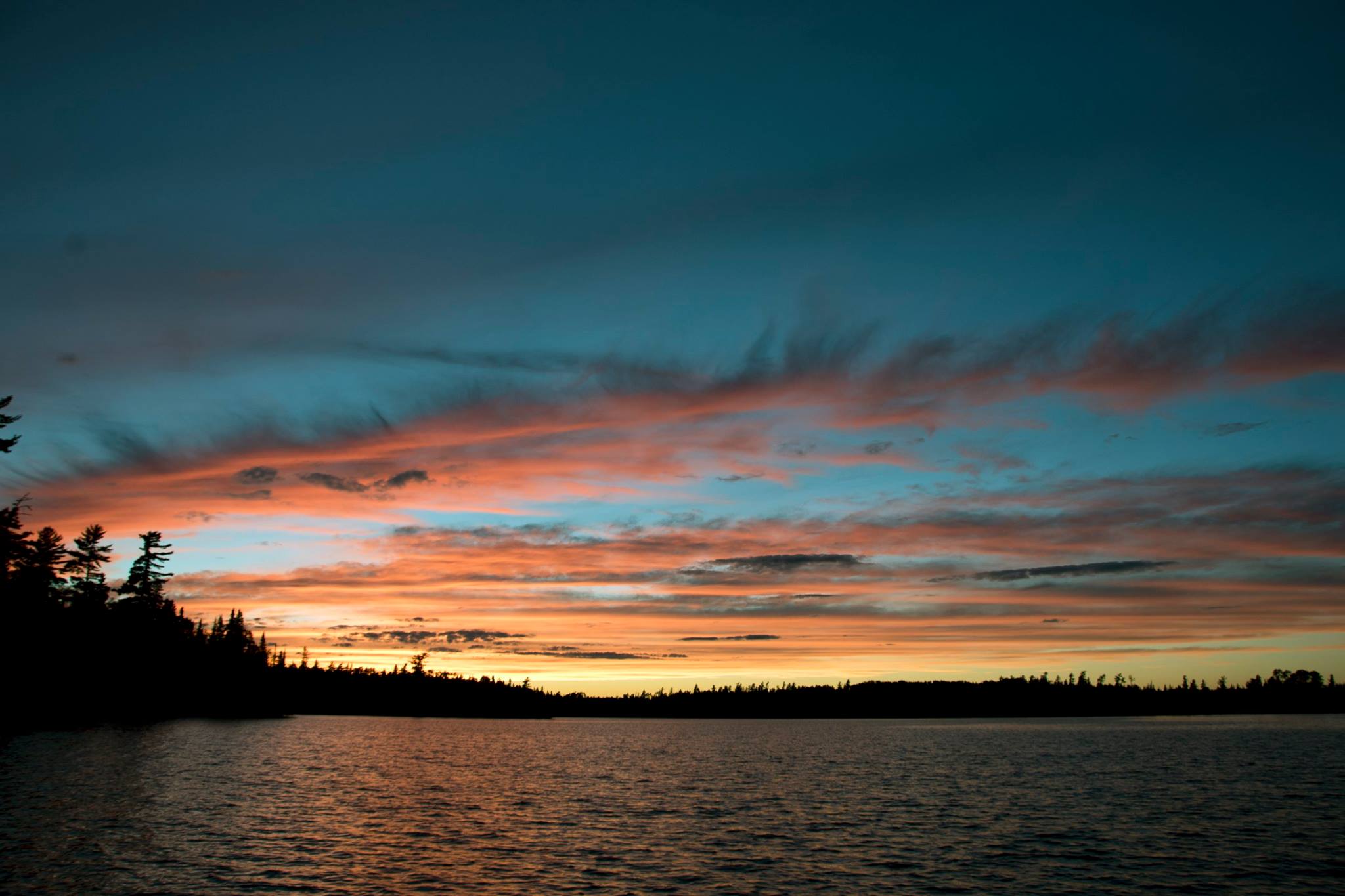 We glide by mere feet away from a massive weather ravaged pine. It clings to a rocky outcrop towering above us and is missing a substantial part of its crown (and I wonder about the storm or bolt of lightning that sheared it off). Despite its cant towards the water’s edge the remaining sixty or so feet of its massive trunk seems perfectly straight and could have been marked as a Royal Navy mast pine had it sprouted a century or so earlier. It has seen better days and has likely stood watch over the lake for a couple of centuries. Later on as we drift away a bald eagle lands on the topmost branch. The two sentinels seem to watch us warily as we drift away. Borden feels untouched and elemental and perfect in how time has shaped it.

Adorned by endless inlets, nooks and bays the enormous White Pines and glittering waves are her finery. Shores and depths teeming with wild-life (beaver, bear, moose, forest cats a plethora of water fowl and copious Pike, Pickerel and Bass) the lake is a vast natural homestead. Each bay and point rounded reveals another incredible vista, but oddly it is the peacefulness that strikes me to my core. This quietude is only intruded upon by the gentle lap of waves along the boat’s water line, my quietly keening tinnitus, and the soft thrum of the Merc. When we turn the motor off to cast into a small cove it is here, born out of distant isolation from human presence and activity where I learned the gift of silence and solitude.

While cottages sparsely dot her shores nestled among the thick trees, initially she seems devoid of human presence. As I grew to know its shape, the details of its edges, shallows, points and outcroppings, I realized it had an earlier life and had seen different (if not better?) days. Seemingly benign place names like Granny’s Creek, Hole in the Wall and Warehouse Bay all pointed to another perhaps quaint time. But the sunken wreckage of freight barges and rusted boom chains still attached to the odd tree on the shoreline bear witness to Borden being a resource. These names and marks chart her most recent decades. Old photos, the long yarns of old-timers and the history books tell a story of her being largely stripped of her once plentiful fish and timber stocks; and yet her appearance now is deceptively resplendent. The dense re-growth of her surrounding forests makes it difficult to imagine what Borden Lake (and the surrounding area) must have looked like before our arrival in the area in 1777 or what it looked like during the peak of her exploitation.

As Borden’s forests again touch the sky and the anglers harvest her finned bounty within strict regulations one might believe we’ve accomplished something noble. Perhaps somehow by managing the land and respecting it we’ve saved a treasure. The reality is that here, so far away from civilization Borden Lake is still a commodity, and there is now something new to tap that has put her on a different map and the miner’s drill now reaches deep below her depths searching for another treasure. The Goldcorp corporate billboard down the road from the mine trumpets the safety of jobs for local families. So it seems the precious resource of her resolute calm interspersed by the cry of gulls, loons and eagles (now joined by the distant slam of dump truck lids and the whir of machinery) simply can’t compete with the allure of gold and jobs.

When I first gazed across Borden’s glassy evening waters it seemed a world away from Bay Street’s noisy ways, an escape from the so-called rat-race of urban life (it is after all a full 11 hours drive to the foot of Yonge Street). For me this distance coupled with the peaceful nature of a watery and silent space was magic. I’m not saying jobs are not important, but something very subtle and precious has been lost as these new sounds echo regularly across the water. My sense of the space has shifted and it now seems not so far removed from Bay Street’s wiles and somehow in my mind our world has become smaller.

Through this meditation I’ve learned about: history, geological vs. human time, nature, silence, consumption, change, sharing space and the fact that I happily know much less than I thought I did. And while I’m sad at the loss of something I hold dear it is also strange to realize I’ve witnessed the birth of a new and different song. I may be wary of this new tune but I don’t know how it ends, and never will. Borden Lake is an odd and complicated confluence of primeval beauty, resources (one priceless and the other priced) competing interests and an indescribable isolation I have struggled to describe and understand. It is also, I think, the one place I feel closest to the heart of our mother earth.

Its late afternoon and the eagle sits alone feasting on the pike scraps we’ve left at “shithawk” rock and the gulls give the raptor a wide berth. As we draw a bit closer it effortlessly soars up and out over the water arcing back into the uppermost boughs of a tree I’ve seen it perched in before. I imagine the eagle greeting the battered pine with a gruff and familiar “hello old friend”. Despite my pining for silence and solitude lost I imagine our repeated incursions do little to change an ancient rhythm well beyond our control (I hope). I also now realize my idea of a still and untouched beauty hidden in the tractless forests of Ontario’s far north exists only in my imagination and that what I’ve come to love so dearly is a ghost. And yet she is still somehow beyond compare and words in her beauty, perhaps even more so given how much she has managed to survive.
Tweet