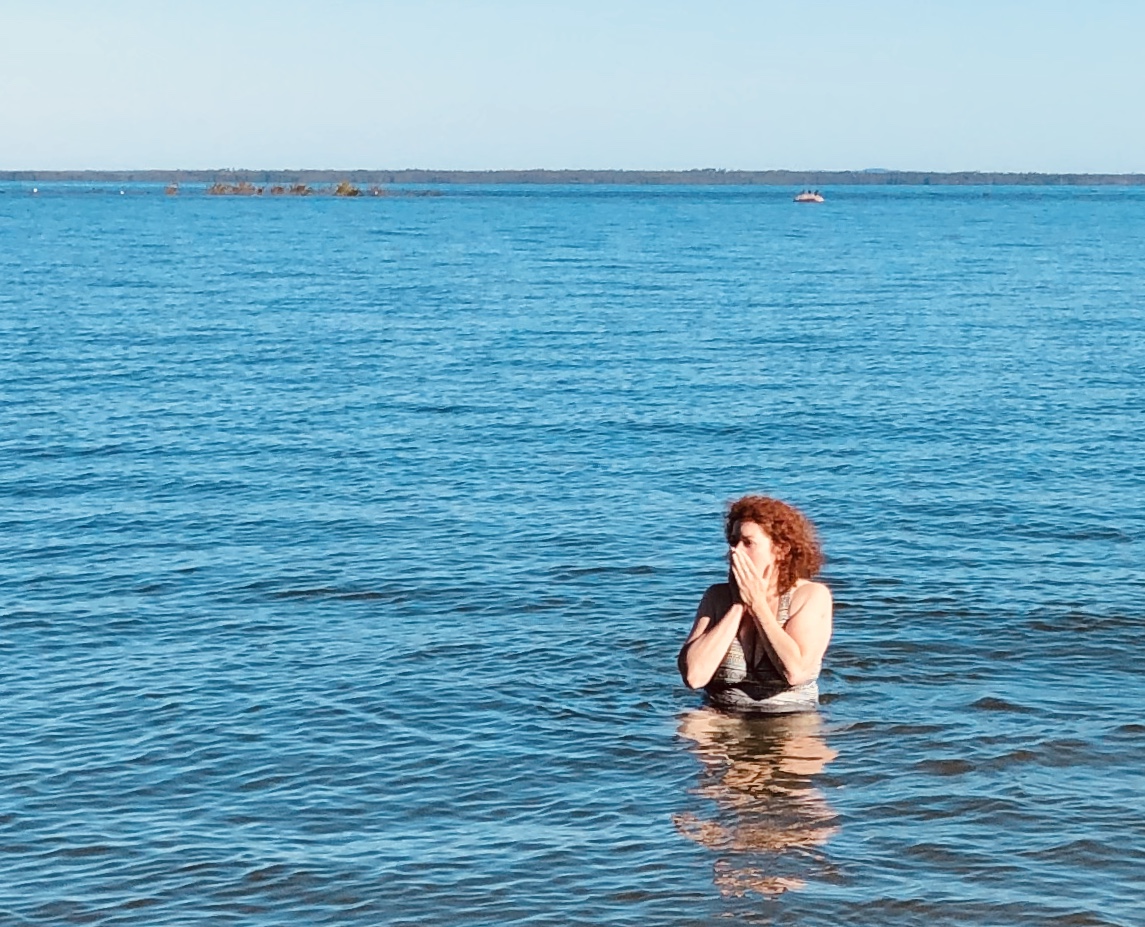 My friend, Sharon, lives just outside the little town of Kagawong, on Manitoulin Island. At the end of her back garden is Lake Huron, so it’s always calling to me when I visit her—to either swim in it, or just sit at its edge under the stars late at night. Anyone who knows and loves Manitoulin will know that the stars often seem so much brighter there.

At the end of August, my friend Sarah and I visited Sharon, and my goal—after a summer of lake swimming in the early mornings—was to try and swim in Huron before the season’s end. This summer, I swam in local lakes around Sudbury, including Lake Ramsey and Long Lake. It would be lovely next year to try and swim in all five Great Lakes, and I may make that a goal, but this summer’s swimming was gorgeous on its own. I know we’re lucky in Northern Ontario. I can drive anywhere near my home—bathing suit on under my clothes, a towel on the seat next to me—and be assured of a swim on a hot day.

That last weekend of August—the Labour Day weekend—was a bit colder than normal in Northern Ontario. It would, unfortunately, herald the end of summer as we knew it. Before most of the other people in the Kagawong house were awake, I wandered down to the shore with a big mug of coffee in my hands, nervous about how cold the water looked, and how brisk the air felt on my skin. I put my bare toes into the water and shivered.

My friends Sharon and Sarah soon followed me down to the shore with coffee, and then stood behind me, watching as my internal debate revealed itself on my face. None of us knew the temperature. I just hoped it was over 65C. Knowing how badly I wanted to swim in Lake Huron this year, Sarah encouraged me to just go put on my bathing suit. So, I swigged back my hot coffee, went back up to the house to change from pyjamas into a bathing suit, and then came down again—ready to at least try.

When I get into a lake, and if it’s especially cold, I tend to put my hands up to my face. Usually it’s because of the shock of the cold water on my body, and so I’m just trying to catch my breath and steel myself for a swim. I try to talk to myself, to gather my wits about just getting under the water. Once I’m in and totally under, I’m fine. I know that. Still, Huron was cold that late August morning. It took my breath away. I got in, but then almost turned around to come out before I dove under. There was that moment when I almost let fear take over, where I almost wasn’t brave.

What I always do, though, before I swim, is to ask the lake if it will give me permission to enter into it. I consider it a gift, to swim in any lake. Once I ask a lake for permission, and I feel like I’m being invited in, that I’m being accepted, then I’ll swim into the lake. It’s an intuitive and prayerful sort of thing for me, a ritual of some kind, so it’s hard to explain.

For me, a lake has a spirit, is a force and an entity. That’s how it was with Huron that cold morning. It took my breath away, and then it gave me something back that I didn’t even know I’d lost. That’s what I love most about lake swimming. It’s magical and sacred to me. When you swim out into a lake, you swim into a painting of a natural landscape that you’ve known your whole life. It’s a homecoming, somehow, and I’m always grateful for it.
Tweet