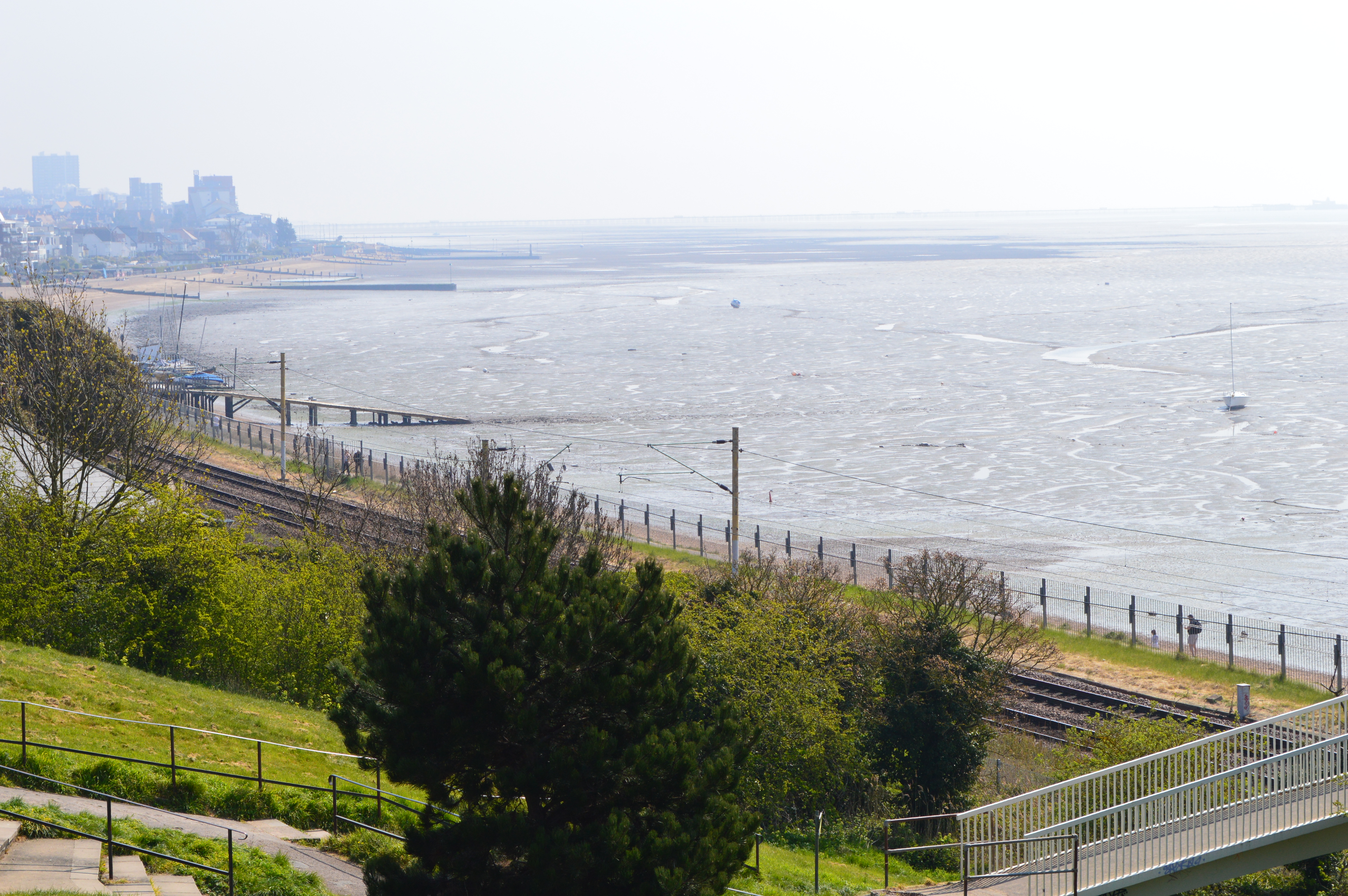 A worms eye view of the Thames Estuary:

Hello there, my name is Wobbly, I am a Harbour Ragworm, an invertebrate, no backbone you know, I have four eyes and live in a burrow I made myself in the mud of the Thames Estuary just about five hundred yards out from the beach at Westcliff on Sea in Essex UK.

I have to be very careful about coming up to the surface of the mud as I could be eaten by crabs, they are my main enemy apart from Humans who would dig me out of my burrow at low tide to use me as fishing bait, this is why I live 500 yards from the shoreline as the humans are lazy and will not walk this far across the mud.

I have a Human friend called David, he doesn`t know he is my friend but he is because he moors his Kayak over my burrow and thereby prevents any other humans finding it, I guess that is a friend, at least it is in my book. One day I overheard David say he wanted to write a Watermark Story about Kayaking on the Thames Estuary, but knew very little about the area so I decided to help him out and write his story for him, and here it is. I might just be a humble Harbour Ragworm but I am quite clever and I like to think I am somewhat of a scientist, see if you agree by the end of my story.

It is Midnight on a calm, warm, moonlit night in the summer, it is high tide and on top of my burrow in the mud there is 5.9 metres of salty water and it covers 36 square miles to an average depth of 4.6 metres, the pressure on me in my burrow from the weight of water above me is enormous, I am flat, my stomach is empty, and I cannot breathe, but that is not a problem to me as I don’t need to. With every hour that passes over the next five hours, the tide will recede and the 5.9 metres of water above my head will reduce down to zero as billions of gallons of water will exit the Thames Estuary almost imperceptibly into the North Sea. As this happens and the pressure on me reduces I am able to eat, mud im afraid, not a particularly appetising meal but my metabolism is tailored to dividing out the nutrients that I need to live from the mud containing the nutrients.

It is now Four o clock in the morning and the mud around my burrow is stirred into life by a stream of cockle boats from Leigh on Sea passing through the deep channel nearby on their way out to the cockle fields at the mouth of the estuary. The vibration and incessant thudding of their engines causes my burrow to collapse around me and I decide to dig my way out to the surface in order to excrete all the mud I have inside me. As I reach the surface I feel the warmth of the summer air and I am able to leave my excretion of mud on the still damp and moonlit surface. I sit on top of my caste and have a look around as it is daybreak and I can see any crabs which might see me as breakfast (one eye in each direction no flies on me).

To the East I can see the lights of Southend Pier, the longest Pleasure pier in the world at 1.34 miles long, it was begun in 1830 and was completed in 1889 to a design by James Brunlees at a cost of 70 thousand pounds. It has survived three fires , being rammed by a Russian freighter which cut it in half, and has supported thousands of charity walks in aid of all sorts of worthy causes. It is still there despite the ravages of time, the elements, weather and wave movements, and beyond it the North Sea. There is a train that runs the full length of the pier used mainly by fishermen in the winter, and day trippers in the summer.

To the South, there is a deep channel of water which extends into Benfleet Creek to the West and then back outwards into the Thames forming an island which is called Canvey Island, and as this area is very low lying it was beset by the worst floods the area has ever seen in 1953 when exceptionally high tides hit the estuary. Beyond the deep channel there is a sandbank locally known as the Ray, it can be reached by those prepared to swim across the thirty or so yards it takes to reach the sandy promontory, but it must be noted that as the tide comes back in it comes in behind you and can cut you off, this will require the lifeboat which also resides on the end of the pier to be launched for your rescue so not advisable. Beyond the Ray the water gets much deeper as it becomes the main shipping channel for the vast container ships making their way up river to the container port of Tilbury or the new deep water terminal at Corringham. On the far side of the river lie the islands of Grain and Sheppey along with the estuary of the river Medway and the county of Kent, the garden of England.

To the North there is the Beach and sea wall of Westcliff on Sea, quiet now in the early morning light, deserted save for an odd dog out for his morning run along the beach, I can hear the occasional bark of joy as his owner throws his ball, he doesn`t know I am here, he can`t see me. I can bask for the next two hours when the water will once again come back to cover me. I have to stay wet as if I dry out I lose my suppleness and my skin hardens and cracks with dehydration, which means I can`t turn without falling in half, not good for a Harbour Ragworm.

The tidal section of the Thames Estuary runs from Teddington Lock in the West, to a line struck between North Foreland Point via the Kentish Knock Lighthouse up as far as Harwich in Essex in the East, a distance of 65 miles. The tide runs at 3 miles per hour so the river never completely empties as the tide reverses by courtesy of the moon every five to six hours. There are 4 tide movements every 24 hours, and therefore the amount of water moving in or out of the estuary on a daily basis is 68 billion gallons, and this happens 365 days a year or 366 on a leap year. (calculations for this are available but do not make for interesting reading, due to the fact that several approximations have to be assumed for the average width of the river and depth of the tide). Do you think I qualify as a scientist?

I can hear the tide coming back in and it is time for me to submerge again and dig another burrow. As the water approaches it is preceded by a line of rather dirty foam being pushed in front of the incoming tide this is from the air bubbles being pushed to the surface and gathered by the slow inward movement of the water.

It is now 12.00 midday, above me I can feel the Orange and White bottom of David`s Kayak, he comes to visit whenever he can and when the wind and tide conditions suit him. He does not know I am here and I cant see him but I know he is there by the vibration of his paddle strokes in the water, he does not stay long but I am glad of his visit.

There is a high wind now and the water in the estuary is being mixed with the mud at the bottom to give a rather dirty colour. The water at the surface is choppy and there are white horses at the top of the waves, the current above me moves fast with the wind and I can feel vibrations as the waves hit the sea wall and rebound back against themselves and by the pressure changes on top of me. Time to dig a little deeper and get some sleep, as it is now 3pm in the afternoon, and I have 2 hours to kill before I can surface again.
It is now 6pm in the evening , and I have come to the surface again, there is dense fog in the estuary and it is decidedly quiet and very eerie, there is no one on the esplanade to my North, there are foghorns going off on the large boats in the tideway to the South but locally all I can hear is the popping of bubbles as the air makes its way to the surface of the mud, David is back or at least his kayak is, moored just three feet away from my burrow. There is not much to see on foggy days in the estuary as it takes on a ghostly persona, chilly and with a deep sense of foreboding. A stranded fish flops frantically in a vain effort to reach water deep enough to support its weight, I cannot help him, he is destined to be eaten by some lucky Gull who may spot him through the fog from above, such is life on the estuary it is not always a bed of roses. Two crabs surface near to me, I can see them but am not worried as I can dig quicker than they can because of my shape and lesser bulk, I can also stay much quieter in the mud so they cannot find me. They spar over territory as if there is not enough room for us all, they spend hours dancing in circles round a worm caste hoping to be the victor who can dig for the worm and guess what, I am not even there, I am under Davids kayak three feet away.

The crab sparring dance comes to an end and both tired crabs descend back under the mud there was no winner, the flapping fish did not get eaten by gulls as he managed to find deeper water on the incoming tide. I outwitted the crabs and did not become their dinner thanks to David for the shelter. And so here comes the foam again, I hear the bubbles popping as they pass over my head, precursors to the slow inward trickle that becomes a torrent.

It is now 7pm in the evening and I must dig down yet again or get swept away by the tide, not many of us Harbour Ragworms get to live out our full natural lives as there is danger lurking all around us but so far I am doing ok. I hope you have enjoyed my story, this has been a worms eye view of a day in the life of the Thames Estuary.