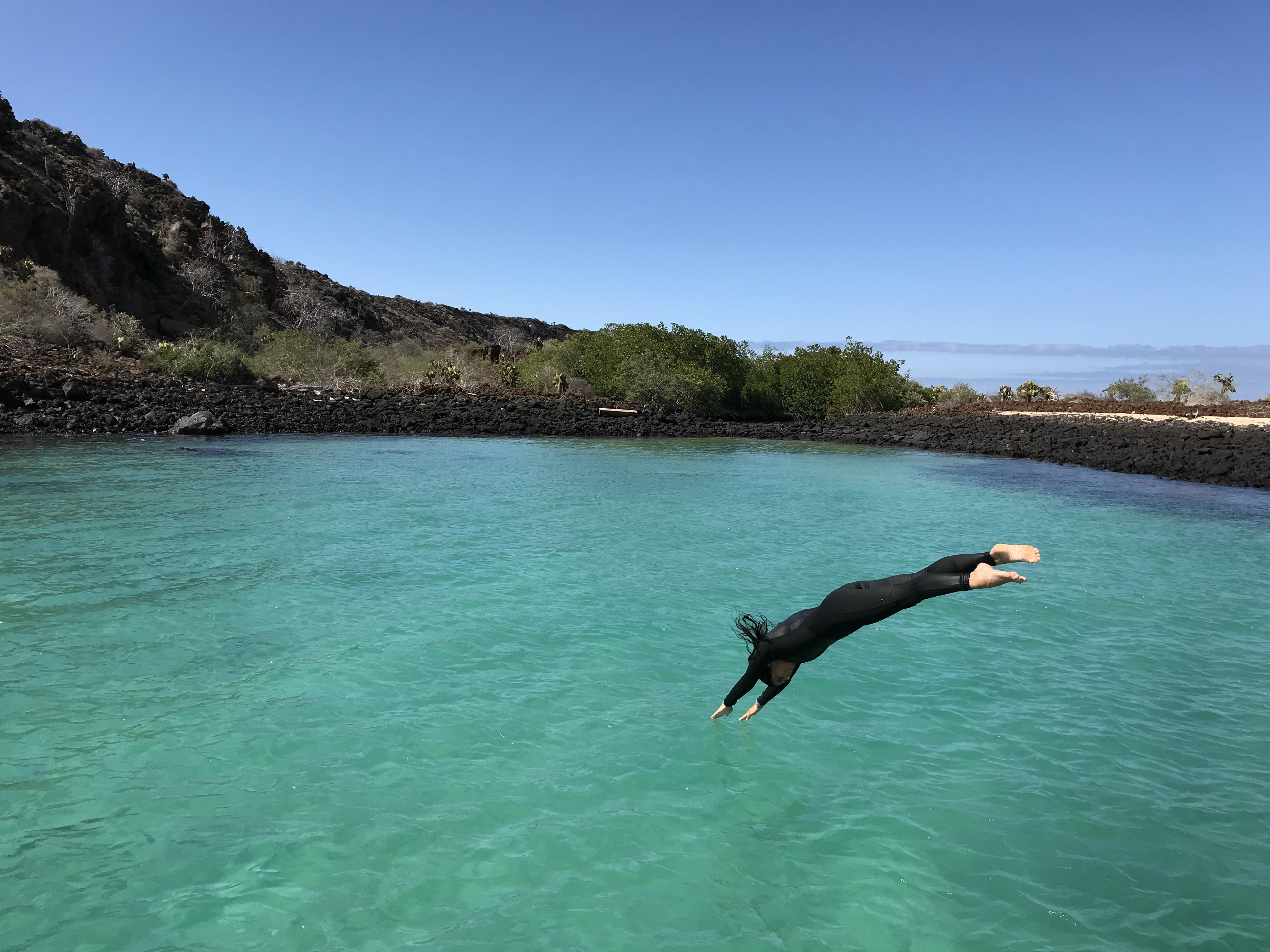 I’m Niki Cesta; a marine conservationist, water-advocate, and explorer. I spent many years with my head in a textbook studying our natural world without boundlessly exploring it. I undertook many rigorous water trainings before authentically becoming a curious scientist. I’ve had the privilege to explore remote corners through fieldwork and outdoor adventure sport before I had adopted a lens of deep compassion, calling, and connection to care for water, our life force.

June 18th, 2018 was the day that I truly, and consciously, dove in. A day when water left an everlasting mark on me. Suspended in the deep, dark blue waters of the Pacific Ocean, between the islands of Santa Cruz and Baltra; I was diving the Itabaca Channel. I had made it to the Galapagos Islands, the world's second largest marine reserve! It wasn’t familiar like my childhood waters of Georgian Bay, and I certainly wasn’t working in hospitality anymore. I rewind 5 months and find myself clocking in for a lunch shift on the POS of a small, cramped office space in downtown Toronto. I had returned home from completing my master’s thesis along the coast of the Aegean Sea in Samos, Greece where life was slow, and nourishing. As soon as I arrived home to Toronto, the reality of working in marine conservation hit hard, and so did my monthly school loan.

I began managing at a formal dining restaurant where the energy was consistently elevated, and the work environment was fast paced. Though it was during that one lunch shift, where time suddenly slowed down and I received the call back to water.
As I was setting mise en place in an empty restaurant, I looked up to see a familiar face slowly approaching me, and it wasn’t just any face. It was the director of a marine conservation organization who lived and worked out of the UK, and now, he was suddenly right in front of me. During my master's thesis in Greece, he and I had worked closely and effortlessly together for different partnered organizations. Now, nearly two years later without consultation there he was, by chance or fate in the middle of the dining room, offering me a contract in the Galapagos. After months of preparation and excitement, I WAS HERE. I had never felt water like this. It was so vibrant, alive, and just teaming with life. Life above the water, life breaking the surface and life in every direction when I looked down through my foggy lenses below me. It felt like I hadn’t used my dive mask for a while.

During the two years that I spent in Ontario, between efforts in Greece and Galapagos, I had only really 'got my feet wet in Toronto'. In 2017, I spent quite a bit of time swimming in Georgian bay and had just begun sailing out of Ashbridge’s Bay, Toronto. During the odd low-wind race, I would dive into Lake Ontario to cool off; most people would look at me funny when they saw me go for a swim. I wasn’t confident enough yet to defend my choice to swim, but I would be soon. Being in the Galapagos built my confidence, calling and connection back to all water, not just the ocean. Being suspended in the middle of the Pacific was incredible. It was rough, rugged, remote, and full of adrenaline, but what about all the threats that this marine reserve was facing because of me having the privilege to experience this unreal moment?

I felt like I could hear the water speaking to me. What about all the eco-tourism it was welcoming, all the plastic waste it was bearing, all the biodiversity loss it was facing, all the exploitation pressure it was enduring? I remember diving into this channel, and truly ‘waking up’. I was mentally transported back home to Lake Ontario where most of our population wouldn’t dare dive in. It was here in the channel where I vowed to create or find work that would connect communities to water/the natural world wherever I travelled for work, though especially at home in Toronto. My experience in the Galapagos nourished my regeneration mindset, it built the foundation for how I explore all water bodies today and it planted the seed that later bloomed into The Wasteland Plan Foundation, the non-profit I founded upon my return from my time here. When water calls, dive in with an open heart and listen to how you can care for it.
Tweet