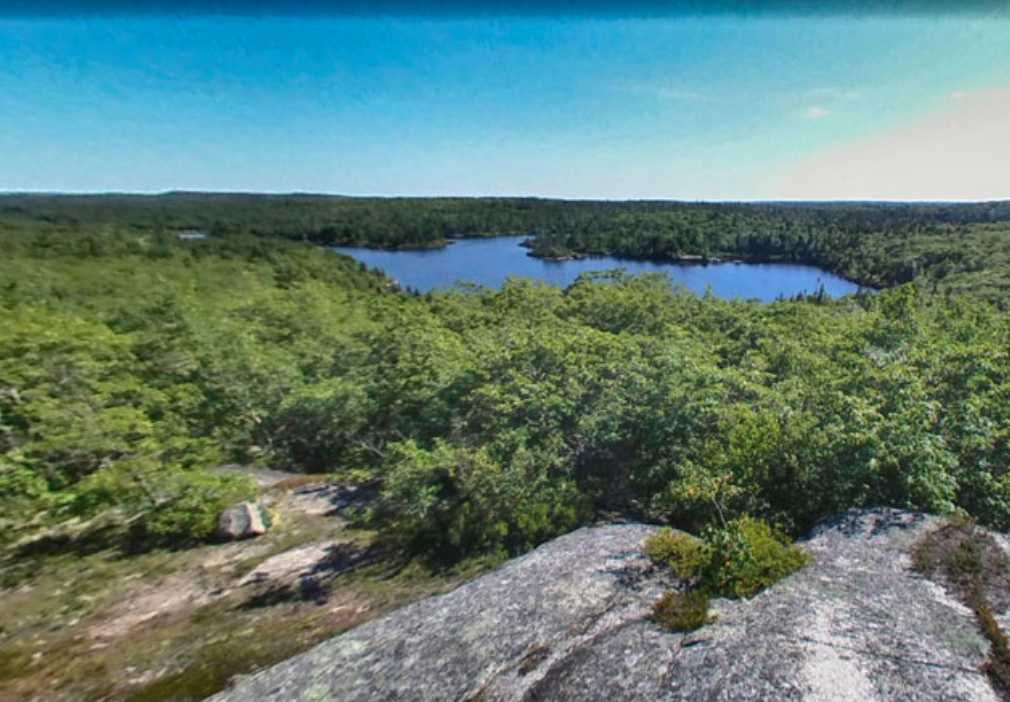 I think at the top of my list [for special places in Halifax] I mean there's so many special places, anytime I can get away from the hustle and bustle and find myself, by myself, it's an important thing in my life. I make time every day to go out into the Blue Mountain Birch Cove Wilderness Area and there's a lake which is just outside of the specific areas, called Fox Lake and in the summertime I go there with my dogs, I sit there and meditate, swim, and spend an hour or two just being by myself, reflecting on things, and so do bathing in nature, or any type of weather, bathing in the trees or swimming or just sitting in the sunshine, looking at the clouds or rain !

It can provide you a respite, for me that is some place where nothing else intrudes and doesn't it also pushes me to a Razor's Edge where I look ahead to the future or reflect on the past and I use that Razors edge to wonder what is coming, and what it means to this favourite place of mine, in Fox Lake. What it was like before colonialism, when the first nations were here, before people arrived and what will it be like in 5 years, 10 years, a hundred years, in a thousand years- because the history paleontology is of the of the area is rich we've got erratics eft over from the last ice ages we've got different water levels, we've got time signatures and the types of rock that make up the basin that Fox Lake sits in. You can see the dikes and sills of the metamorphic rocks and igneous rocks that are upwards 650- 700 million years old- it's a Confluence of many different things!

It's also a place where I watch the water, the atmosphere, and the land come together. The geology, the geography, the meteorology and if you go at night and becomes a little branch of astronomy where you can go and look and see the stars and the planets!

It's so visceral for me because it connects me to nature takes me away from technology and takes me away from intranet and computers and that kind of thing. So it’s a very powerful place for me mainly because it gets rid of all the distractions, all the conversations and lets me be at peace with what's around me. And it also puts a point on the cusp that we're at right now. The important part of this is to recognize that people are having a huge impact on the environment and in a microcosm: Blue Mountain Birch Cove is very similar to what's going on in the rest of the world. We're encroaching on it, and surrounding it, in the same way we're encroaching on all the fallow land in the world. Weare either farming it or building roads through it or placing agriculture into it ,and it takes away from the natural habitat that is absolutely necessary. What little is is left it's almost unsustainable, and so it becomes a place of Last Resort. So I find what makes me feel strange, makes me feel dad and almost apprehensive and I draw as much as I can from it to face for the remainder of the day.

Fox Lake from a drainage perspective, is the headwaters of the area, so water flows into all the other lakes, it flows into Ash lake, into Hopsin’s Lake or Pond into Kearney Lake and so many other places and so it is probably the cleanest water in HRM! It's in many ways very pristine and it's under threat, as it's privately owned, we're trying to acquire it in the city but I'm not sure that will be successful in acquiring it, they've already put forth proposals and tried to develop it but there's a lot of opposition to it, it's an amazing place and it’s so clean- you can probably see in the summertime 6 to 8 feet into the water, it is very clean for our lakes in Nova Scotia it's not a chocolate lake so if it's quite and it's got fishing at people do fish and that kind of thing I'm not a hunter or Fisher- I just I appreciate what's there! So it's place is one at the top of the arc that goes down to all the other like soda streams that flow out of it mature trees anything from deciduous Oak to Carboniferous some very large pine trees stands!
Tweet