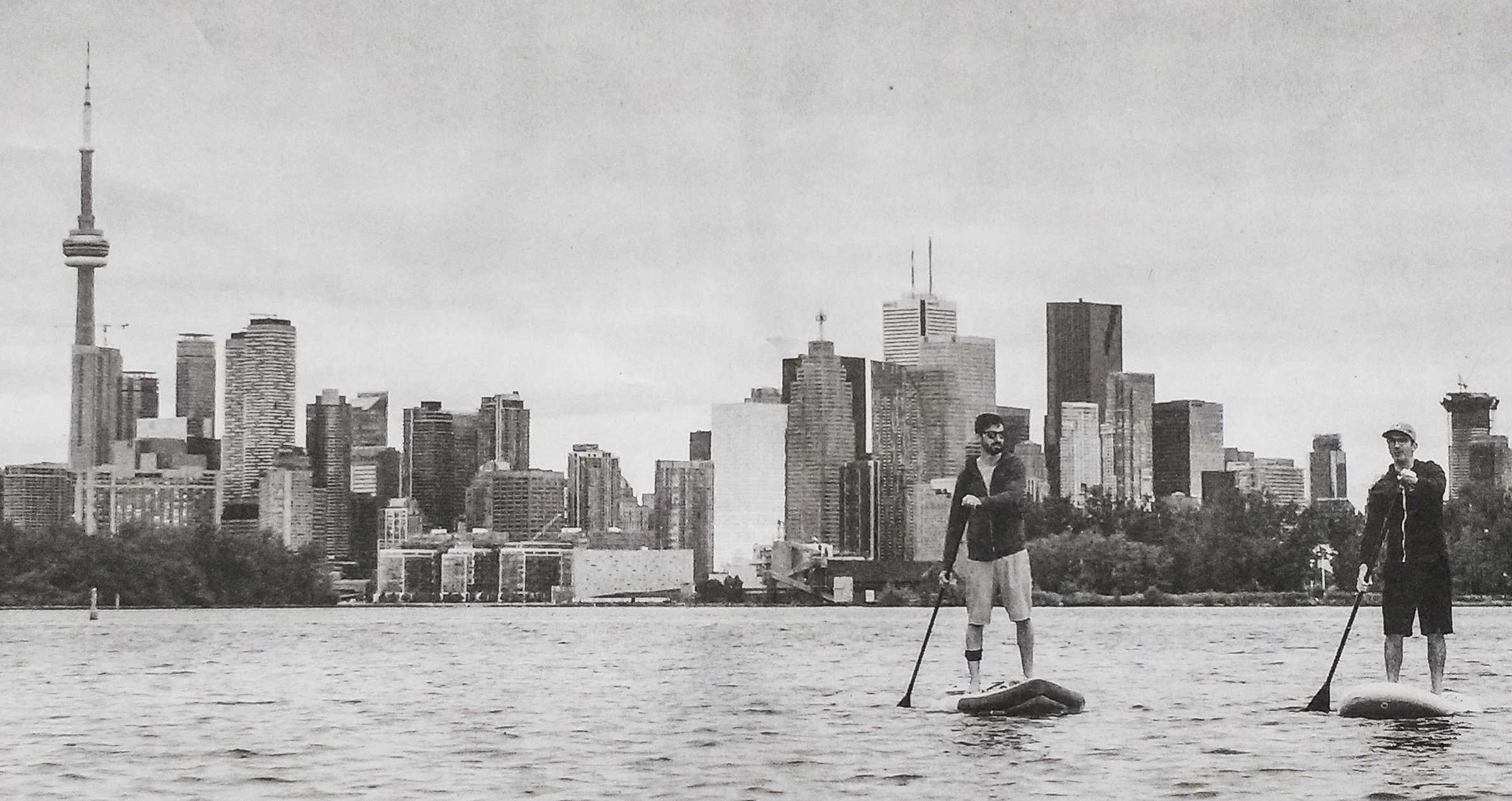 Late last September, when the summer that never bloomed finally gave up a few weeks of glorious heat and sunshine, I met my friend Josh out in Etobicoke to go paddleboarding on Lake Ontario. Josh and I first began paddling together three summers ago, when we discovered a mutual love of the sport, which we’d only really done at our respective cottages, and that we’d both recently purchased new paddleboards for in the city. Our typical routine is to meet up in the morning after dropping our kids at school, pump up our inflatable boards (think a thicker, wider surfboard) in the parking lot or on the grass at Cherry Beach or Woodbine and set out to explore the Islands, the Bluffs, the Leslie Street Spit or whatever part of the lake looks good.

Both of us had work reasons to be out in Etobicoke that day, so we decided to launch from Marie Curtis Park, where Etobicoke Creek meets the lake, forming the border between Toronto and Mississauga. It was a perfect day: 25 degrees, blue skies, not a lick of wind. And that late fall sunshine tha seems purere and more forgiving that its unbearable summer cousin. We paddled from the beach along the shore, heading out to a point of land beyond a yacht club, marvelling at how nice it was in this part of the city neither of us had ever been to.

Then I looked down. And Saw brown. First spots. Then trails of them. Then a soup. The sight was biological. The smell unmistakable.

“Shit,” I called out to Josh, about a hundred feet away from me. “I think we’re paddling in shit.”

We had made a key mistake (other then paddling in between two sewage treatment plants, it turned out): We went west instead of east.

The overwhelming majority of my life as a Torontonian has occurred on the west side of this city. My friends, my family, the places I eat and hang out, the schools I went to growing up, the stores where I buy things, the parks I take by kids to, the hill I learned to ski on - pretty much all of it lands me west of the Don. The east is still largely foreign territory. I typically spend more time in New York City in a given year then I do in the East End. And I don’t go to New York that often.

That changed when I began paddleboarding. With each trip on the water, I realized that my heart might belong to the west on land, but out on the water, it’s in the east.

I grew up on Lake Ontario. My family belonged to a now defunct yacht club, and we had a sailboat that my father would take out on weekends and summer nights. I spent a couple of years at a sailing camp there, learning to harness the wind. This was hardly a glamorous world of white pants and regattas. Picture an eight-year-old trying to coax a barely manoeuvrable glorified bathtub called a “pram” out of the Hanlan’s Point ferry docks as a giant boat bears down on him with its foghorn blaring, and you get the idea of the sweet lunacy of it all. Then we sold the boat, quit the club and I didn’t go back on the lake in Toronto for 20 years.

The day I bought my board, I drove down to Woodbine Beach and caught some late summer waves. Why had it taken me this long to get back in the water? The beach there was beautiful. The water was warm. And it certainly seemed cleaner than the filthy harbour I swam in daily in the early 1990s. The next day I decided to paddle closer to home. I found a place to park near Ontario Place, and asked a security guard how to get to the water. After a delicate barefoot dance down some concrete and a sketchy hop over a fence with my board, I was paddling down the channel beside Lake Shore Boulevard, heading toward Sunnyside. Joggers gave me a thumbs up. People took pictures. Then I looked down.

I’ve seen some disgusting things in the water in my life: loads of dead carp in the harbour; plastic bags and jugs galore. I surfed in waves nearly black with sewage in Rio de Janeiro, and once had a used condom float onto my surfboard in Venice Beach. But there’s a special kind of disgust that comes from paddling by a floating toilet seat downstream from the combined sewer that runs from your house.

“Yeah, you should really stick to the east,” my friend Gabi told me with a smile, when I told her the story in the daycare hallway that afternoon. “It’s generally much cleaner than the west. Also, make sure you don’t touch your face or mouth after going in the water until you wash your hands.”

I knew to listen to Gabi. Not only was she a competitive open-water swimmer, but she worked for Lake Ontario Waterkeeper, a non-profit that monitors water quality in the lake, especially around Toronto, and advocates for its improvement through better information and management. Though the city touts the cleanliness of our beaches, the reality is that it tests very few spots along the lakeshore for pollution from sewage runoff, and because of insufficient treatment infrastructure in this growing city, Toronto regularly “bypasses” the treatment plants and dumps raw sewage right into Lake Ontario. Only after Waterkeeper began its own testing for contamination, and shaming the city via the media, did Toronto begin disclosing when it was dumping sewage to the public, and even then it does so incompletely.

Gabi instantly became a cheery, fact-laden profit of doom every time I told her I was going paddling. “Don’t go out by Bathurst! The sewers weren’t built to handle the CityPlace condos and it’s just a dump right into the lake,” she’d say, reminding me to try Kew or the Bluffs instead. Don’t go near Sunnyside. Don’t ever think about the harbour. Never go after it rains. When I told her about the shit slick out in Etobicoke, she laughed. “Oh god, we don’t even test there because the E.coli is off the charts. You might want to go to a walk-in clinic.” I asked if she was joking. “Mostly,” she said, with the same disarming smile.

Despite this, it wasn’t the fear of gastrointestinal repercussions that kept drawing me to the eastern waterfront. It was the experience. From an urban planning perspective, there’s simply no comparison. West of downtown, the waterfront is dominated by concrete: the Gardiner, Lake Shore Boulevard and train tracks on land, plus the Billy Bishop airport and an endless breakwater a hundred feet off the shore meant to protect from waves, but adept at keeping fresh water from circulating. When you paddle here, not only are you looking at a decidedly urban landscape, the sound of it all is deafening; it’s less of a hum than a piercing drone of cars, trains, trucks and planes, the rushing bloodstreams of half a city’s infrastructure jammed against the lake like some Robert Moses fever dream run amok in rebar and aggregates.

In the east, you get nature. Cliffs covered with trees that light up when they change colour in fall. Thousands of migrating birds cawing around the spit. A beach filled with laughing children and sunbathers. Say what you will about the epic NIMBYism of Beachers, the place is undoubtedly the most beautiful neighbourhood in this city of neighbourhoods. Every time I go paddling there, I half heartedly joke about it as my retirement destination.

Josh and I had our first paddle of the season a few weeks ago. The water was flat and glassy. Clouds of swallows spun in the air, while sleek lines of black cormorants skimmed across the surface. You could see all the way to the bottom. The air was hot. The water was still bitter cold. We dove in without hesitation.