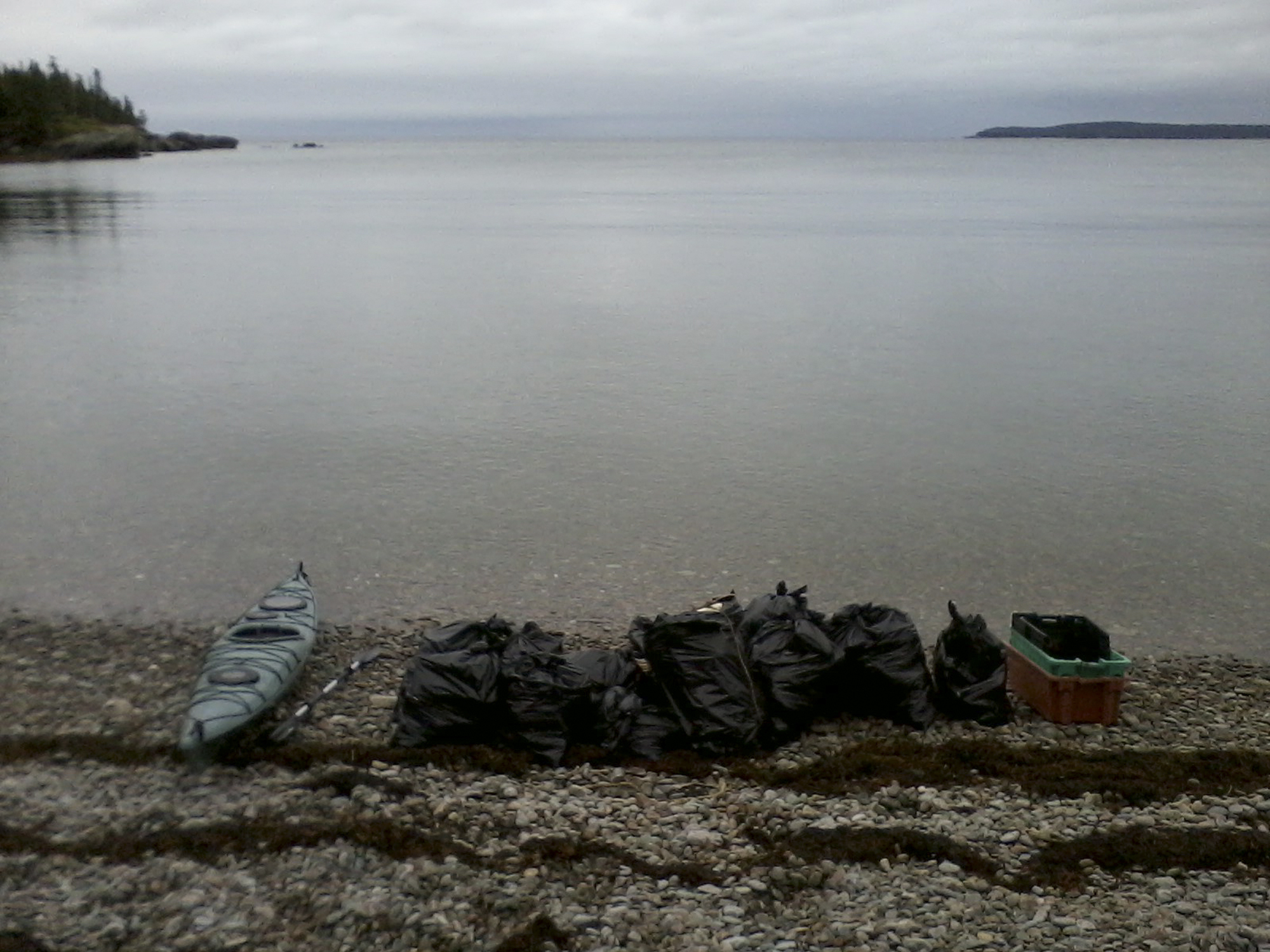 My Watermark is Bay of Fundy, NB.

I am standing on the edge of a small field facing south. I close my eyes and my senses become heightened. I can smell - almost taste - the fresh air. There’s a saltiness to it. I can hear the rhythm of the waves as they hit the rocky beach; the sound is very soothing and almost hypnotic. The breeze hits my face and is strong enough to cause the spruce and fir trees to sway off in the distance. I hear small birds - chickadees and red-breasted nuthatches. I open my eyes and I’m in paradise. I am overlooking Chitticks Beach, on the Barnaby Head Nature Trail at New River Beach Provincial Park.

New River Beach is located in New Brunswick on the Bay of Fundy between Saint John and the U.S. border. Its claim to fame is the long sandy beach, which attracts sunbathers during the summer, kite flyers in the spring and fall, and soul searchers with their dogs in the winter. But it also has a wonderful two hour walking trail on Barnaby Head, a small peninsula that juts into the Bay of Fundy.

My name is Andrew Kierstead and I am the Director of the Saint John Arts Centre. I spent my summers growing up in New River Beach and explored the various coves, beaches and wading pools for crabs, sand dollars, moon snails and starfish. In recent years, the family “camp” has become my permanent home, so paradise is just outside my front door.

But there is something subtly sinister about this picture I’ve described. It’s in the water. No, it’s not some strange creature that preys on unsuspecting kayakers. It’s garbage. Call it what you like: flotsam or jetsam. For me anything man-made that floats onto the beaches of our coastal waters is a hazard to the marine life and to us humans, as well.

The Bay of Fundy has the highest tides in the world; for those of you who are not familiar, high tide and low tide occurs twice a day. Think of tides as an invisible conveyor belt that with the help of wind and currents, draw anything on its surface towards land and then, after depositing it on a beach, retreats quietly to repeat the process again.

Four years ago, my partner, June Foley, and I decided to do something about the garbage along the shore on the Barnaby Nature Trail. We are not alone in adopting a stretch of coastline or beach to keep clean. There are many individuals and couples across Canada who focus on their piece of paradise. We set about visiting the five beaches two or three times a week, to pick up any man-made objects. The process was simple. We would start at one end of the beach just above the high water mark. With our heads down and a large plastic garbage bag in hand, we would walk across the beach together, stopping to pick up anything that looked man-made.

Using our kayaks, we also removed the garbage from less accessible places like New River Island, which is a bird sanctuary located not far from New River Beach. We photographed what we collected and recorded the date, name of the beach, number of bags filled, and the type of garbage collected, on an Excel spreadsheet. In 2012, we collected 87 bags of garbage along with other larger items such as tires and plastic components used on the salmon aquaculture industry. The following year showed an improvement with only 64 bags collected. It became apparent that the majority of garbage collected came from two sources: the salmon aquaculture industry and from local lobster fishermen.

In the spring of 2014, I made an appointment to meet with Trevor Holder, who at the time was the Minister of Tourism, Heritage and Culture for the Province of New Brunswick and the minister responsible for all provincial parks. I asked him to look over the material we had collected and to discuss with his government colleagues, what could be done to prevent the pollution from these sources. He seemed surprised that so much garbage had been collected on just one small coastline. I suggested that there were no villains, only a problem that needed to be solved, and that educating both the lobster fishermen and the salmon aquaculture industry on the importance of clean water could have a strong impact on the environment.

Perhaps the message did get through to those who rely on our coastal waters for a living. In 2014 June and I collected only twelve bags of garbage and in 2015 there were only ten bags. Needless to say we are thrilled by the marked decline. Maybe the tide has turned for the better in my part of paradise.

Here is a list of items that were removed from the beaches along the Barnaby Head Nature Trail: