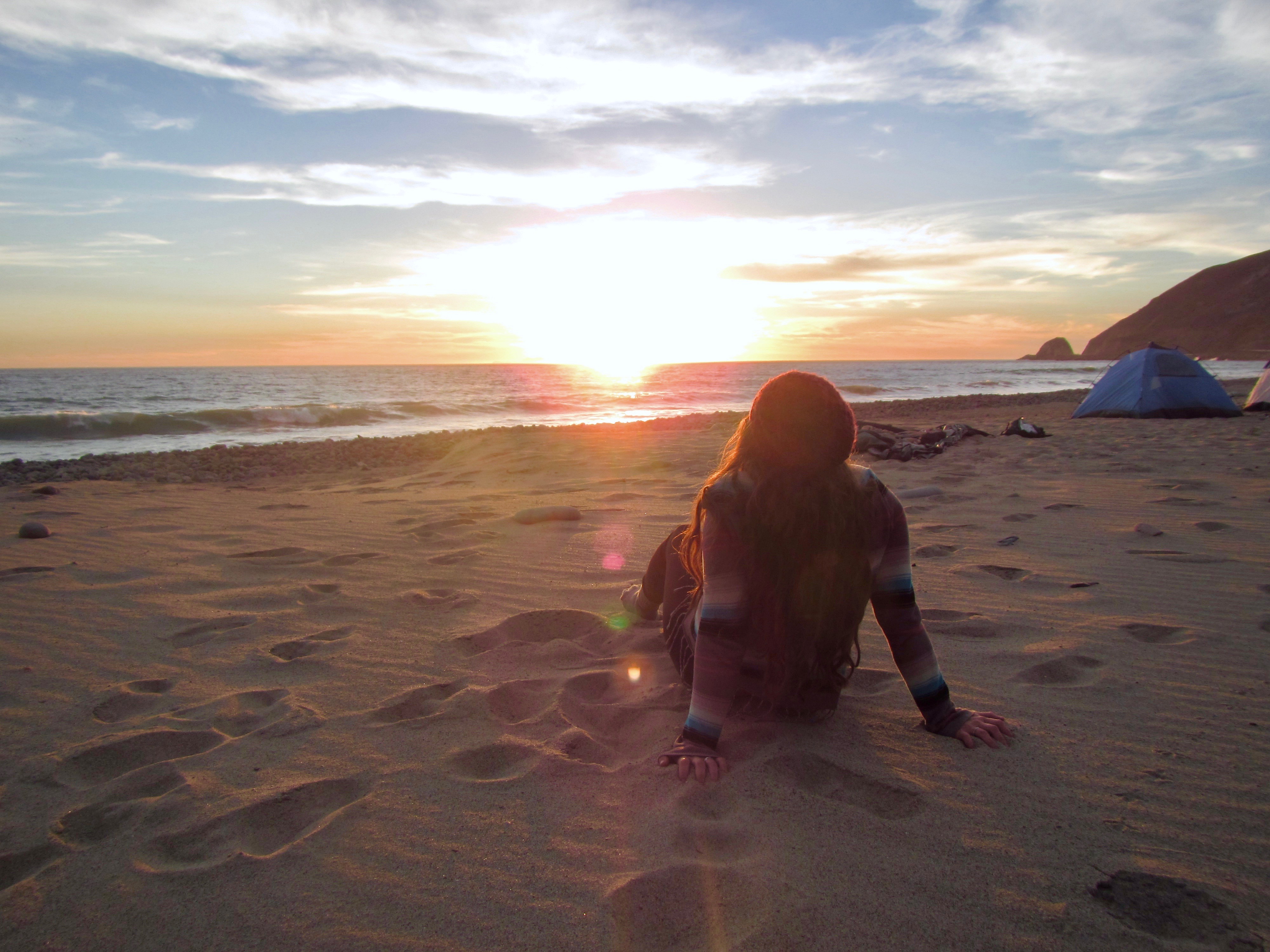 Dani Lindamood is the co-founder of Girls Gone Water. With her collaborators she explores and encourages human connections to water. This is her Watermark:

What is your Waterbody?

I grew up in San Diego, California but spend a lot of time along the California coast with the Pacific Ocean. I don't put a lot of validity into these sort of things, but I was born at the end of January which makes me an Aquarius, the astrological sign for the water bearer. I'm not sure if it was a ‘chicken or the egg’ situation, but I grew up hearing this and I have always been drawn to water.

What is your connection to the Pacific Ocean?

I think many people are afraid of the Ocean, but I’ve never felt any fear towards it.

For me, the Pacific Ocean is somehow always different, yet the same. A particular geographic location has the same views, and yet the coastlines are constantly changing with different waves, different power behind the movement, different calm areas, shifting sand banks. Over the course of my life I have felt drawn back to those views: those different coastlines, all those beautiful places where I can stick my toes in the sand or walk out to the edge of the cliff, look out over this great expanse of something that’s so different in all these individual places and yet so singular when looking at it as a whole.

When I was growing up my dad and I would always run out to the waves and play around and body surf. We would try to get a sense of what the water was feeling today, how many waves were coming in, how powerful they were today, where the riptides were. I just felt a sense of pure joy in sharing that time with my father.

As I got older, I kept coming back to the Pacific Ocean in different ways too. When I was in high school, I learned to surf and that was a way that I connected with the water and my friends. Even if it was just paddling on your surfboard and laughing until you got knocked off by the wave you weren't paying attention to, it was a place for me to explore those connections. I moved away from California when I was 23 but before that, during my undergrad, I lived near a mountain range in LA called the Santa Monica Mountains. My school was just on the other side of the mountains and I remembered this feeling of pure joy going through the mountain passes and canyons to get to the ocean. There was always this feeling of awe, relief, gratitude, and calm when you would find that first spot where you could look out over the water. I spent so much of my time by the Ocean with friends, loved ones, lovers, strangers and animals, all of it. We could just connect and share the joy of the water together.

Just as much as it's been about connecting with other people it's been about connecting with myself too though. I keep coming back to this idea of the Pacific Ocean being different and the same all at once. I think it was very symbolic to me when I was going through periods of growth and change myself. I would go to this place that I know is in constant flux, yet it was never truly different, and see what lessons I could take away from that and apply in my own life. I'm always going to be the same person, I'm always going to be Dani, but at the end of the day it's okay if there are these small changes and fluctuations. The Ocean helps me cope with the uncertainty that can come from our uniquely human ability to reflect on who we were, what we’ve become and where we want to go. It's very centering and grounding for me.

How has this guided you?

I would say the Pacific Ocean is at the root of my love of water. It has moved me physically spiritually and metaphorically. I absolutely think it was the gateway into appreciating the majesty of water and helped me be able to appreciate other bodies of water as well.

But I didn't decide to go into the water sector consciously because of my deep love of the ocean. What pushed me into the field was actually a water resources class I took in my undergrad. With all the injustices that are going on in the world, I knew I wanted to play a part in righting those wrongs, but it wasn’t until the end of my bachelor’s in International Development that I began to understand that it’s not just about people, but really about people in relation to their environment.

I've had the opportunity to travel extensively throughout the world and I’m always struck by how unsustainable our western way of life is and how many people in less developed countries seemed happier with their simpler living closer to nature. Through my travels and building friendships with people from different cultures, I started to learn that international development is not about getting people to an unsustainable western standard of living, but more so about what sustainable development and a good life means in different cultural contexts.

The water resources class I took helped me to see that water is an amazing all-encompassing metaphor for our human-environment connection. In a lot of communities, people don't build their own houses or grow their own food, so they don't have a direct connection to their environmental resources or the impact their lifestyle has on the environment.

But with water, it’s so different because our need for water is so tangible and so universal. Every single person knows the importance of water in their life, even if they've never consciously thought about it. It only takes a minute of probing to help someone in North America realize that water is one of the first things they use in the morning and a resource they interact with multiple times a day. It also doesn’t take much for people to realize that sustainable access to water can make a huge impact on the quality of people’s lives. In order to seek out and build a good life, access to clean and safe water is a basic necessity.

After my undergrad, I did an internship with Agua Inc Development Group in The Gambia, West Africa where I worked to build improved waste water treatment systems and support community projects for sustained access to clean drinking water. Working with different NGOs, governments and universities, it really solidified for me that water is fundamentally important wherever you go. But I also learned that there are so many different factors that need to be taken into consideration with water. Where it's coming from, who is upstream, is it within your borders, how is it affected by somebody else's actions? All of these questions came with different stakeholders to consider and different power dynamics at play, so I needed to approach water holistically – to bring people in to share their knowledge, identify challenges, and co-design solutions. After I finished my internship, I knew I wanted to capture that process of collaboration around water a whole lot better. This led me to my Master's Degree at the University of Waterloo where I had many experiences that just kept reinforcing these themes of water and its importance.

How would you say water builds connection?

There are very few things that are as universally binding to humanity as water. Despite different cultures and worldviews, everyone on the planet understands the importance of water to life. Because of this, I think it inherently brings people together.

How did this lead to Girls Gone Water?

My friend Irene Brueckner-Irwin and I began dreaming up Girls Gone Water in 2017 while we were completing master’s degrees related to water at the University of Waterloo. During that time, we recognized that a lot of the dialogue happening about environmental issues used “doom and gloom” messaging to try and get people to act. To us, this wasn’t a very effective way to communicate the dire need for climate action because it doesn't give people hope or something to work towards, but it also did not reflect what we were seeing on the ground while we were doing our master’s research.

We had met so many amazing people doing such incredible work to support & protect water in their communities – a beautiful expression of how deeply connected they felt to their water resources. While we both worked specifically with people involved in water in some way, we realized we wanted to help all people see water as an example of the way the planet and environment provide. Our human connection to water is a really great entry point for environmental action, so we started thinking about how we could engage people to care for the planet by sharing positive, inspiring stories about people & water.

In our dreaming, Girls Gone Water was originally supposed to be a documentary series featuring places around the world and documenting people's connections to water. We started going through the logistics of trying to get funding and put words to what we were conceptualizing. After many iterations, what we ended up creating was a virtual space to highlight the amazing work being done around the world to better understand, support, appreciate, and protect our water resources, including special space for underrepresented voices such as women working in the water sector. We wanted to showcase these stories because they're real and they're powerful and raw and provide a wellspring of hope.

We have tried to make Girls Gone Water a dynamic space using different kinds of storytelling so there’s something that speaks to everyone. Officially we launched in August, 2018 and recently, Irene and I were able to bring on another collaborator, Maggie Hall, who has also shared her Watermark. I think together, we’ve made something that’s a really easy opening for people to learn about and see action happening on the issues facing our planet. Girls Gone Water is about highlighting the hope and the light in the world to inspire people and deepen our human connection to water. What we're trying to communicate is that you’re not alone, your actions do matter, and collectively, we can do a lot of really amazing things to move our planet & societies in a positive direction, starting with our water resources.

Girls Gone Water launched in August 2018 and recently released their feature project on women working in the Bay of Fundy, check it out here. Follow Girls Gone Water’s Instagram & Twitter at @girlsgonewater and Facebook at Girls Gone Water.