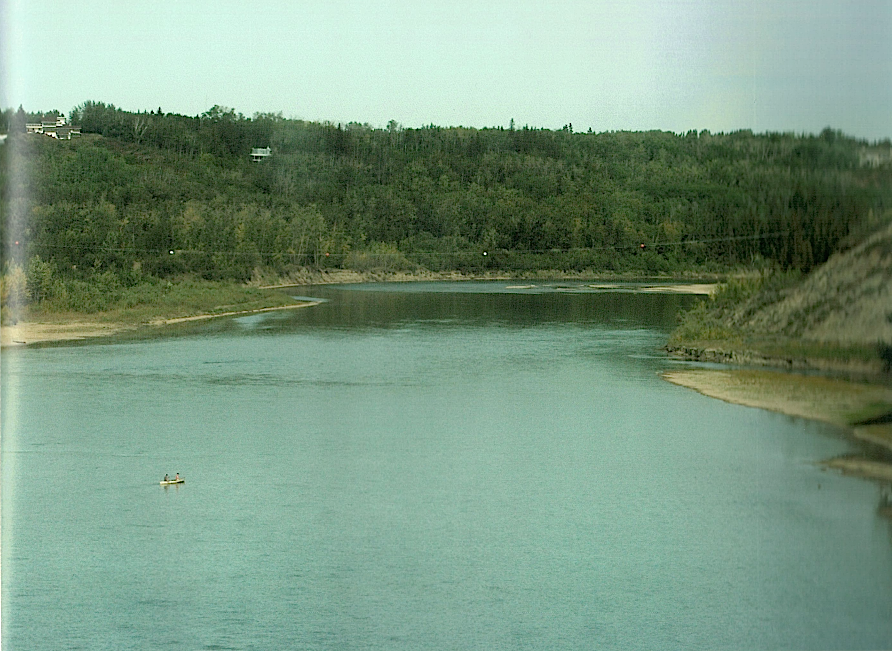 My North Saskatchewan River watermark dates back to 2009. This was around the time Karen and Kevin Lowe, Mark Mattson, and Britt Standen were starting the Riverkeeper organization, based in Edmonton.

Britt Standen, one of my fellow directors, has a son named Max. At the time, I don’t think he was even old enough to drive a car, but he was really into aircraft and flying. The Standens had a friend with a small helicopter who was willing to take a couple of the Riverkeeper folks up for a 45 minute tour. He promised to give us an aerial view of both Edmonton and the river that flows through it.

I’d never been in a helicopter before. I thought it would be enormous, but it was sleek and relatively small - almost like a mechanical dragonfly. I sat in the back, away from the domed window in front. I had a side window to myself, with an incredible view of the landscape below as we cruised above the North Saskatchewan River.

What immediately struck me as I looked down at the shining river snaking through Edmonton was how completely different this was from Toronto, where I live and work. Toronto sits on the edge of Lake Ontario, but access to the waterfront is extremely limited, either cut off by the 401 and the Gardiner Expressway or dominated by urban development projects. Here, the city looks as though it has been woven around the river; incorporating wonderful green spaces at almost every bend along its course. The parkland serves a practical purpose. It is a tool for mitigating the damage caused by seasonal flooding. But the presence of all this green space along the river's edge meant that people here enjoyed more free and easy access to the riverfront than I did my own waterfront in Toronto. The psychological barriers that I was used to didn’t separate water from city in quite the same way.

This view was the first hint of a perspective that would become clear to me on countless return visits to the city: Edmontonians take great pride in their river. Looking down at that beautiful river and the city that wove around it, I found myself speechless. The uncharacteristic silence must have been worrying for my fellow passengers. Just before we landed, someone turned from the front. “Are you okay?” said a crackly voice over the headset.