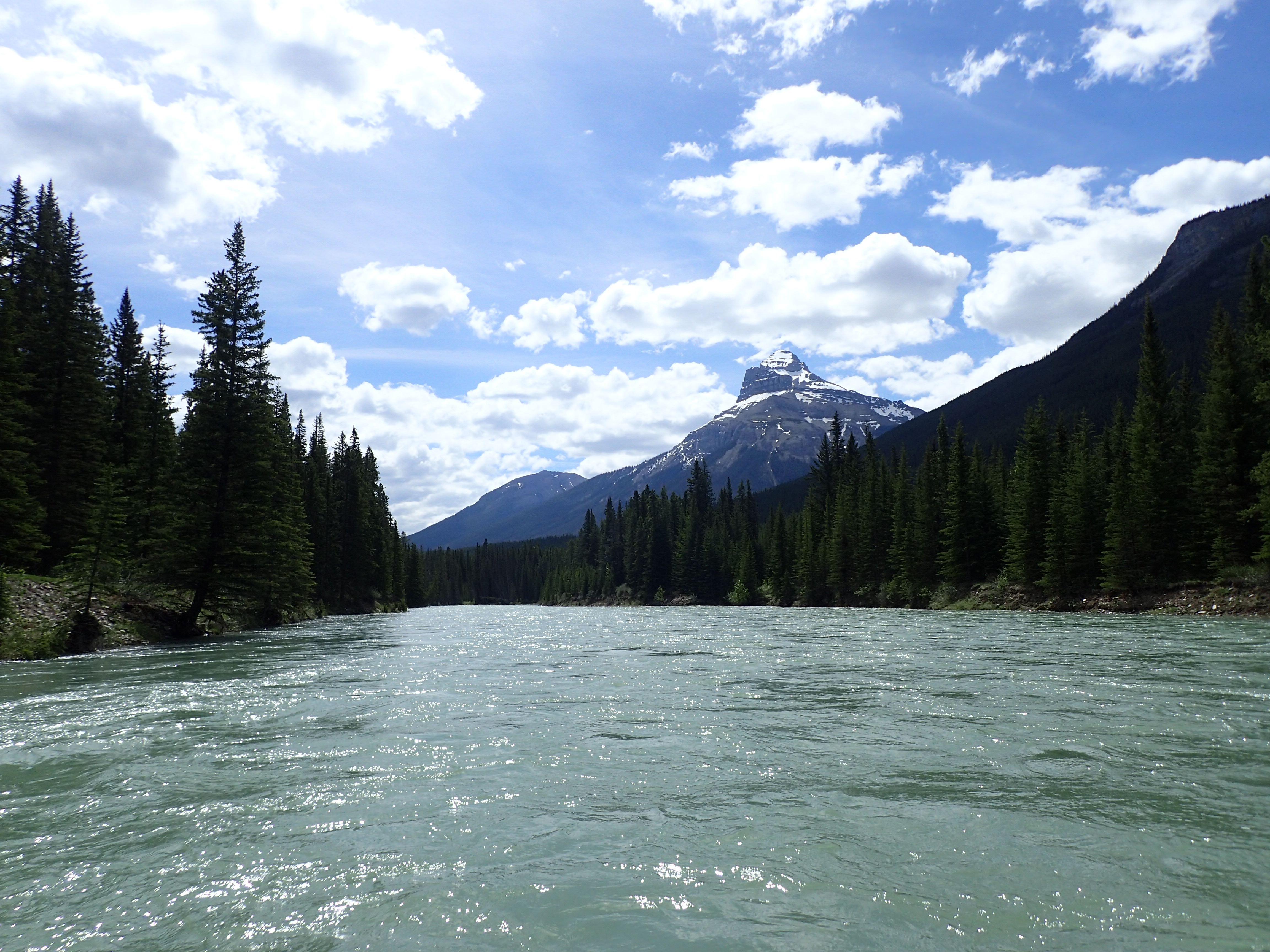 My Watermark is the Bow River, Alberta.

During the summer of 2015, my partner and I pursued a dream to travel across the Canadian Prairies by canoe. Our journey began on the outskirts of Lake Louise, near the headwaters of the Bow River, and finished near Brandon, Manitoba.. This journey gave us the chance to witness and experience incredible parts of Canada's landscapes and waterways, and to learn new things about one another. It symbolized the beginning of a commitment to experiencing the world and learning together. The following is an excerpt from my accounts of our journey. The full highlights of this trip are captured on our travel blog, http://creeksandpeaks.com/.

We knew when we started this trip that there would be highs and lows, but we never expected that they would come so early on. What a roller coaster this week has been.

We first put our paddles in the water at Lake Louise just over a week ago. From there, we had a leisurely float down the Bow River past Castle Junction to Johnston Creek canoe campground, then on to Banff the following day. The Banff townsite materialized suddenly, as if out of nowhere in the middle of the mountains. Our first portage of the trip, around Bow Falls, went smoothly, despite one of our water jugs rolling into the river and another being stolen from beside the pathway. From our map, we had expected to find a campground on the outskirts of town, but when we saw none we decided to paddle on to Bow River Campground just past Canmore. We followed the river along below the Three Sisters and Ha Ling Peak, illuminated in the twilight, and arrived at the campground just as night began to fall. The campground was full, but a friendly couple allowed us to squat on the edge of their site for the night.

We awoke the next morning expecting that our day would be occupied by a long, painful portage around the Bearspaw, Kananaskis and Horseshoe Dams. Fate had other plans.

We put into the water after a lazy breakfast and floated along, reaching a fork in the river about a kilometer downstream from the campsite. We agreed that the right side of the fork looked like the correct route to follow. We swung around toward the outside of the fork to avoid a fallen tree in the river; what we didn’t notice was that the current was carrying us toward another tree jutting out from the left side of the riverbank.

We paddled hard to avoid it, but not hard enough. The tree caught Harry in the stomach and stopped the boat dead. Realizing we were in trouble, Harry tipped backward out of the canoe, hoping that would free it. It didn’t.

The canoe had become trapped on another branch. Harry watched helplessly from the water as the boat slowly listed to one side and flipped over, dumping Abby, our dog, and I into the frigid water.

I bobbed to the surface and looked around for Abby, but couldn’t see her. I quickly realized that she must be trapped under the boat. Screaming to Harry, I frantically tried to grab the bow of the boat and drag it toward shore, but the boat was heavy and the current was strong. Harry, much taller than I, swam underneath the boat and found that he could reach the river bottom. Grabbing the gunnel of canoe, he pushed up hard and managed to flip the boat right-side up.

I watched Abby bob out from beneath the boat, looking scared but unhurt. Knowing that we needed to regain control of the canoe, I pushed myself up out of the water and back into the heeavy boat. That I was able to do this from the side, without the canoe tipping, speaks to how heavy the canoe was when fully loaded with our gear. Once in the canoe, however, I could see that our situation was about to become much worse: ahead of us was a large log jam, stretching most of the way across the river.

Seeing that Abby was unable to climb up out of the water on her own, Harry hoised her up onto a nearby log before swimming back toward me and the canoe. I tried to paddle away from the logs, but it was no use. Once again, the canoe became trapped against a log. This time, however, water began to rush in over the sides. As the canoe swamped, I fell out again and was carried downstream toward another part of the log jam. I remembered the advice I had learned about log jams during my training as a raft guide: approach feet first and then push yourself up and on top of the logs. Fortunately, I avoided any sharp branches and climbed out of the water unhurt. Harry was washed up onto the other side of the same log jam. Quickly but cautiously, we began removing what gear we could from the canoe and lifting it to safety on logs while the water rushed through the branches below. Once we had salvaged everything we could, Harry worked on trying to dislodge the canoe. With the current pushing hard against it, there was little he could do.

Once we realized that Harry would not be able to get the canoe unstuck on his own, we decided to call for help. We were trapped in the middle of the river, with freezing cold water flooding through the trees all around us. Luckily, the dry bag with our valuables, including my cell phone, had been accessible and we had strong cellular reception. I phoned 911 and was patched through to the dispatcher in Canmore, who contacted Alberta Public Safety in Kananaskis. Again, we were lucky, because we were able to change into dry clothes and keep warm while we waited. The rescue boat arrived in less than 30 minutes and plucked us all out of the dangerous situation.

We lost our canoe, tent and gear barrel, but we were lucky to make it out alive. We spent the next several days staying with friends in Calgary while we worked with locals, guides from Canadian Rockies Rafting and Canmore Fire Rescue to see if any more of our gear could be retrieved. Several people went out to the log jam but the water was still too high to get close enough to the canoe.

When we finally accepted that it could be a very long time before we got our canoe and the rest of our gear back, if ever, we began to collect borrowed and donated gear from some of the many people who offered to help us out. I started out feeling pretty low as we began the re-grouping effort. After all, this trip has been my dream for many years: this is not the way I had envisioned it unfolding. But as we met up with one person after another, their encouragement began to lift my spirits.

Finally, the night before we were scheduled to get back on the river, we made a trip to Mountain Equipment Co-op for some supplies. As I stood in the emergency supplies section, I looked up at a fellow who was entering the checkout line and was stuck with amazement: there, in front of me, stood my canoeing idol, Karsten Heuer. Karsten and his wife, Leanne Allison, made a documentary about their own canoe trip across Canada, which retraced the footsteps of Canadian author Farley Mowat. That he would appear before me the night before we restart our journey after a major setback was nothing short of incredible.

I told Karsten the story of our journey and our accident. He was familiar with the stretch of river where it had happened and supportive of our continuing. I wrote down his email address and promised to send him updates.

Yesterday, nearly a week after the accident, we made it back onto the river. We were all still a bit shaken, but nevertheless eager to continue on our journey. Geoff MacDonald, who completed his own journey across Canada by canoe with his wife Pam just two years ago, loaned us his canoe and saw us off at the river. It was a fitting end to our week: to begin our journey anew with the support and well wishes of other dedicated Canadian paddlers.
Tweet