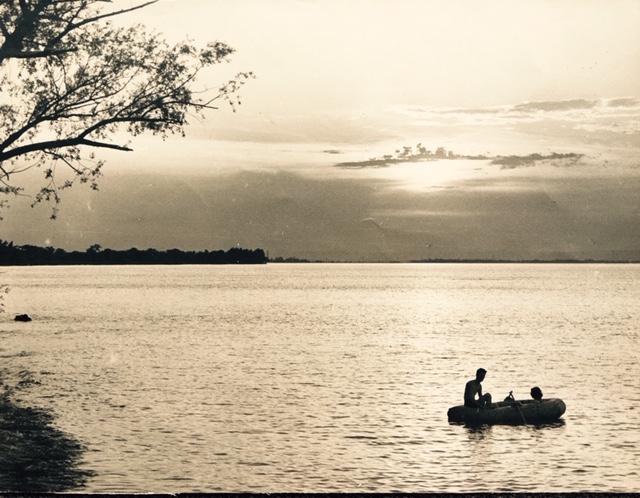 My watermark is Hamilton Harbour- where those steel mills and the hard working people of Hamilton meet Lake Ontario and the world beyond.

I was born and raised in Hamilton, Ontario, Canada, which, at least back then, was a blue collar, working class town. A steel town.  Steel  City.  We had steeltown taxies and steeltown towing and steeltown coffee. Pretty much steeltown everything it seemed to me. The majority of my classmates’ father's worked in the steel mills, or in jobs related to the steel mills.

My parents' home, my childhood home, was located on the edge of the Niagara escarpment. My bedroom window faced out over the escarpment to the city and the steel mills, harbour and lake below. The last thing I would see each night looking out my window was the flicker of the city and huge blue flames shooting out of the stacks of Stelco and Dofasco. And the first thing I would do each morning looking out that same window was check to see whether any new tankers had arrived in the Harbour overnight to deliver or take away whatever it was the mills needed or had produced.  (In fact my younger brother Mark and I used to look through a telescope down at the Harbour and log by name and date the arrival and departure of those tankers in a book "The Great Ships of the Great Lakes", picked up on a tour with my parents of the Soo Locks. We were always a little sad when the winter came and the St Lawrence froze, the excitement of logging the first ship of the next spring being excruciatingly too far away to even imagine).

As a child I often looked at the beautiful black and white photo of my parents floating in a dinghy in the Harbour in the 40s, and the photos of my grandparents' cottage on the Hamilton beachstrip. But I never really connected the photos of my parents and grandparents and what the water had been to them just one and two generations before me, to the Hamilton Harbour I knew and experienced. In my day, in my life as a child, Hamilton Harbour  did not represent swimming, drinking or fishing.  Rather, in my day it represented steel town. I grew up in a time when Stelco, in a prosecution brought by the Ministry of Environment, defended itself by stating Stelco couldn't be responsible for polluting the Harbour because the Harbour was already polluted. That was my Harbour.

I moved away from Hamilton in the 1980s to go to school and start my career.  I became reconnected to the Harbour in a different way in 2001 when my husband, Mark Mattson, as the Lake Ontario Waterkeeper, made headlines in the Hamilton newspaper and on the local TV stations, having found floating blobs of coal tar in the Harbour along side the steel mills.  It was the first big publicity that Lake Ontario Waterkeeper had received, having been formed only a few months earlier. And I remember being out for dinner with my husband and my parents shortly thereafter and being coincidentally seated at a table next to the then President of Stelco. I could see him staring at my husband Mark and I remember thinking, at first at least, I hope my parents aren't embarrassed. But then I looked at my parents. And they weren't embarrassed because they knew how great the Harbour had been. They were proud and encouraged by the work Mark and Lake Ontario Waterkeeper were doing. They were all in.

And then and there, I woke up not in my childhood bedroom looking at the Harbour from afar but as an adult, up close, looking to the future. And for the first time I thought that there could be, must be, a better way for the people of Hamilton, its industry and its water.  For the first time I started to think about the people of Hamilton and their children and grandchildren. I started thinking that they deserved to have their Harbour and their lake back; that the Harbour and the lake shouldn't just be there for industry's taking at all costs. And to be clear, when I had that thought, it wasn't in a “bad industry vs good lake” all or nothing sort of way. I was a corporate lawyer working on Bay Street, married to an environmental lawyer. I had heard all sides and I appreciated what the steel mills had meant to families of my classmates and the people of Hamilton. The mills had been their life blood. The mills had put food on their table and roofs over their heads. I didn’t expect Hamilton to all of a sudden stop being an industrial town for sake of its Harbour. Hamilton had always been an industrial city. (It was first coined the ambitious city back when it was incorporated because of its industrious ways).   But Hamilton had not always been a city where the Harbour and the lake were there for the industry alone.  To the contrary, for many years the people of Hamilton had benefited both from all that is good about being in a city where there is industry and work, and the beauty of living on water’s edge.  I had evidence of that fact in my parents' and grandparents' photographs. Yet sometime after World War II  it would appear that industry and the city gave up on the Harbour and the nearby lake as somewhere to swim drink fish. Recreational use of the Harbour and lake became a luxury not a need or a right. The world of steel became a competitive one and our Harbour, our lake,  paid the price of our steel mills having to remain competitive in a competitive world. Those coal tar blobs and the work of Lake Ontario Waterkeeper shook me up. It was then that I started to dream that, with the work of Lake Ontario Waterkeeper, industry and others who loved Hamilton (and there were and are many of us), the Harbour and the lake  could once again be what it was for my parents and my grandparents and the generations before them.

As I write this, 15 years after the coal tar blobs, I am happy to say that thanks to the work of government, Hamiltonians, Lake Ontario Waterkeeper (of course), and local industry (special shout out to McKeil Marine) there has been much progress along Hamilton’s harbor front. (I can't tell you how much Steven Joyce's watermark and the video of him swimming in the Harbour, with the steel mills in the background, makes me smile. Check out Steven’s Watermark if you haven't already).  It's now 2016, and when I look to the Harbour now I still do look for the tankers and the blue flames every single time I am in Hamilton. (Those flames do still burn, albeit a little less brightly and under new ownership). There is still work to be done of course (there always will be).  But now, in addition to the tankers and the flames, I also look for the paddlers and sailors and the fish and fishermen,  and yes, swimmers too. I don't log them, but trust me, they are all there.

My watermark, dedicated to the memory of my parents, is Hamilton Harbour - and the coal tar blobs and the Lake Ontario Waterkeeper that reconnected me to the Harbour's greatness and all that it had been, is and can be. And while I haven't yet convinced my husband to float romantically in a dinghy in the Harbour and recreate the photo of my parents,  it is now , at least as far as the Harbour is concerned, a very real possibility.
Tweet