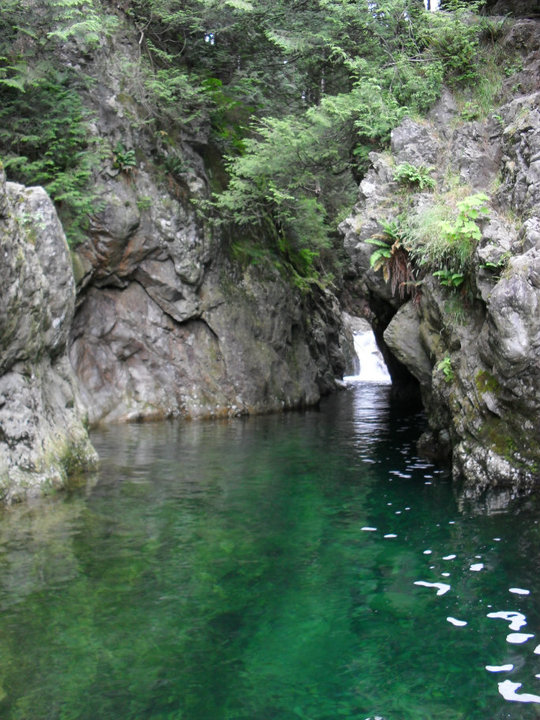 I used to work as a Park Ranger in Lynn Canyon in North Van. I was a First Responder for cliff jumpers as there are lots of people who jump off the cliffs there for fun, but also for other reasons. At certain times of the year, the canyon waters rise up during a snow melt or when it rains on the mountain — so it is very exciting to go down there and you see all this white water. It’s just so beautiful and magical how powerful the water in that canyon is. Over thousands of years, the water has carved out these grooves in the rock and just meanders its way down towards the Pacific, or more specifically, Burrard Inlet.

Not only did I work there, but I also lived right next-door to the canyon as a teen and would often take my dogs for hikes in there. On many occasions, I would take my two dogs and we would cross the canyon to explore and go swimming. I used to go swimming at a beautiful spot we called Corner Pools. Being a Park Ranger, I knew the risks associated with certain areas at certain times of the year in the canyon. This one area I used to go swimming in was usually a safe place to be, but on this particular occasion, the water was still high. I was trying to cross from one side of the canyon to the other, something I had done many times before at that particular spot, but my dogs were hesitant this time and didn’t want to cross. So, as I reached the other side, I started encouraging them to follow.

They were too scared so I had to cross back over the canyon. The water was pretty high and pretty strong at the time. Sophie, my Border Collie/Husky mix, had no problem crossing the water. As I managed to put her in the water, she started to swim over and was kind of dragged downstream a bit, but then she got over and she was fine. My other (bigger) dog, however, had long hair so when I put him in the water he struggled so much that I had to pick him up and swim across the canyon with him.

So, that’s one of the many stories I have from my time in Lynn Canyon. What the canyon never fails to remind me is that water is a powerful thing. You should never underestimate it. Water is something to be appreciated, respected, and to be read wisely.
Tweet