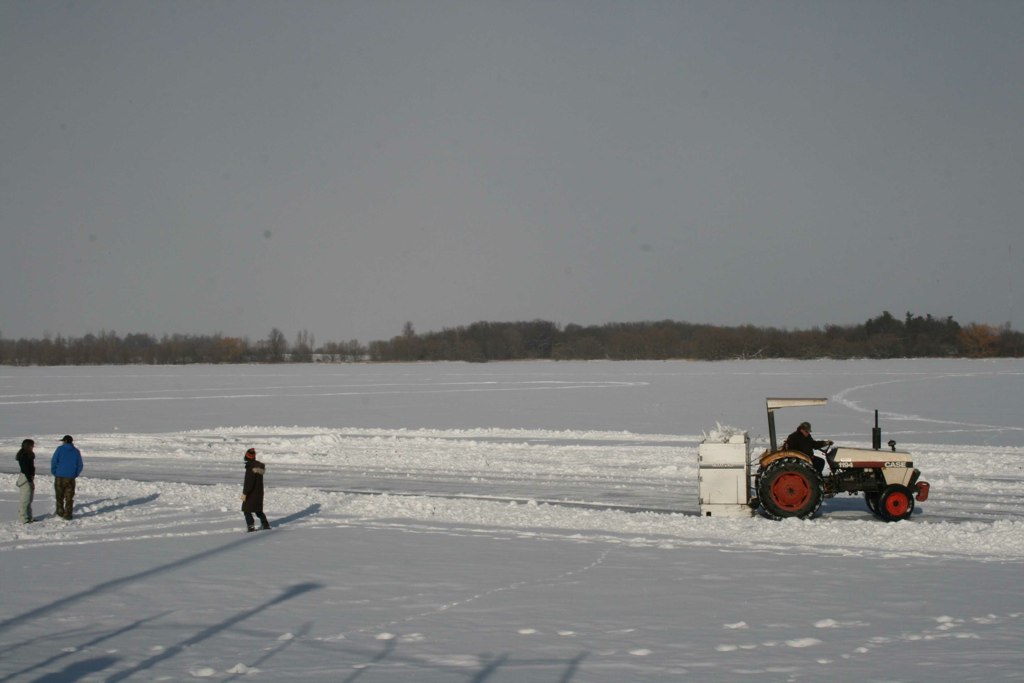 My Watermark is Lake Ontario.

When a warm sun threatened Wolfe Island’s annual hockey tournament, the locals left the rink and turned to the lake.

Truth be told, neither had I — until Wayne Grady mentioned in late January that he and some other writers were heading to a hockey tournament on Wolfe Island. This was the brainchild of islander Mark Mattson, president of the environmental watchdog organization Lake Ontario Waterkeeper.

Mark’s fellow organizer was Dave Bidini, a Toronto writer best known for Tropic of Hockey — wherein he travels the world looking for pickup games. The aim of the tournament was twofold: have fun and raise money for a new community centre on Wolfe Island.

Last summer, a hundred volunteers (including Don Cherry, who has a place on the island) had donated labour and money for a new rink. They built boards, laid insulation and poured cement, along with installing pipes to ensure ice all winter long. Trouble is, the pipes had yet to be linked to a refrigeration unit.

The day, Saturday, January 28, started out promisingly. No wind, proper cold, welcome sun. At the ferry docks that morning, the scribes arrived: me, then Wayne, then Steven Heighton and Toronto poet Michael Holmes.

We were to play on what Mark had called “an overflow team” — a second band of islanders thrown together for the tournament. We needed a name and it was Steven who came up with The Journeymen. A journeyman is a craftsman not yet a master; in sports, the term describes a grinder — as opposed to a star. Lest there be any confusion.

When we got to the rink, the black shirts (Wolfe Island Rocks) were playing the green shirts (Lake Ontario Waterkeepers, singer Sarah ­Har­mer among them). In the wings were the blue-sweater­ed Gas Station Islander team from Toronto, Dave Bidini’s red-sweatered Morningstars and The Journeymen, in yellow broomball sweaters.

Our pre-game warm-up at noon was brief. The ice made a dubious cracking sound as we skated over it, and there were slushy spots. Mark consulted Dave, then Ben Woodman, the ice-keeper; all agreed to delay games until the cold rolled back in. But three hours later, I could still feel the warm sun on my back, and it was decided: The rink was a no-go.

Meanwhile, road hockey had commenced in the parking lot and thought was given to completing the tournament that way. Then someone said, “What about the lake?”

Local fishermen who know the currents suggested a spot by the summer ferry dock. When we got there at 4:30, a truck with a plow had already cleared a rectangular space, Ben had his Zamboni in high gear and men with shovels were shoring up the sides.

And so it was that the 2011 Chris Mattson Memorial Lake Ontario Cup (honouring Mark’s uncle) was played, and rightly so, on the lake itself. Goalies, in gear and too bulky for cars, were conveyed in the beds of trucks, as were nets.

For the first game, Wayne and I donned blue sweaters and played for the depleted Gas Station Islanders. Steven and Michael went Morningstar red and stayed red. That game ended in a 1-1 tie.

Then Wayne and I donned yellow for a tilt against the Wolfe Island Rocks. The game saw some playful roughhousing (boys will be boys and islanders islanders), with the odd player landing in the snow. But the friendly spirit of the tournament prevailed, as did the Journeymen.

At dusk, 10 trucks — with high-beams on — encircled the sheet of ice and islander Mike Hawkins set up his portable generator and two floodlights. There were no benches, so players stood in a line at the edge of the ice, advancing from rear to front as their time came. For the last game, yellow versus blue, seeing the puck — never mind handling it — was iffy. I remember our coach (the aforementioned Mike Hawkins) saying, “Guys, guys, shoot from anywhere! The goalie can’t see the puck!” I felt like saying, “Coach, coach, neither can we!”

With darkness, the cold had returned. I was glad to be out there scraping the ice with the others before that last game, moving to stay warm. It had been years since I had cleared ice, and decades since I had ambled about in hockey gear — and boots. Or eaten a pre-game hot dog. I was 10 again.

Blissful it was to be on the blades in the semi-darkness, admiring the Kingston shore and seeing the lights twinkling there while the stars glittered overhead. Many islanders — including wide-eyed kids in snowsuits — had come out to watch us, and Mark announced the games with a microphone in hand. During a warm-up, a brown pup lumpty-dumptied onto the ice and stole a puck. A blueshirt told us that one year, when the tournament was played on a snowless Lake Ontario, the ice was so clear you could see to the bottom and the next day one besotted player skated all the way to Gananoque.

Playing shinny with strangers is as close as I will ever get to what musicians do when they are introduced to one another on a stage, utter a few code words, and proceed to play as if joined at the hip. That day by the docks was surely the best day of my winter.

When I later asked Wayne Grady if he shared that sentiment, he wrote: “Roger Angell has said that there is nothing like the thwack of a baseball in a mitt to vaporize decades. He evidently didn’t grow up hearing the sound of skates scraping on ice. I grew up playing on outdoor rinks, with Eaton’s catalogues strapped to my shins with Mason jar sealer rings and a pair of boots for goal posts. This tournament was a bit more technological, but not much. I loved that the whole community was involved, from cooking hot dogs to clearing the ice on the lake.”

Likewise queried, Steven Heighton wrote: “I loved the way we had to intuit where the puck was much of the time. I loved that I got to carry the puck unmolested for a good five seconds once because nobody knew I had it. I loved how, later in the game, it took the ref — and the goalie — a good 10 seconds to realize a goal had been scored. Imagine the view from a thousand feet overhead: a small patch of light, with fast-skating figures and long shadows reeling across it, in the middle of a dark expanse stretching about a hundred miles to the west.”

On the ferry home, I leaned into the lashing wind at the bow, heard the ice pans crashing below and felt what I should feel more often: terribly alive and lucky to live where I do.
Tweet