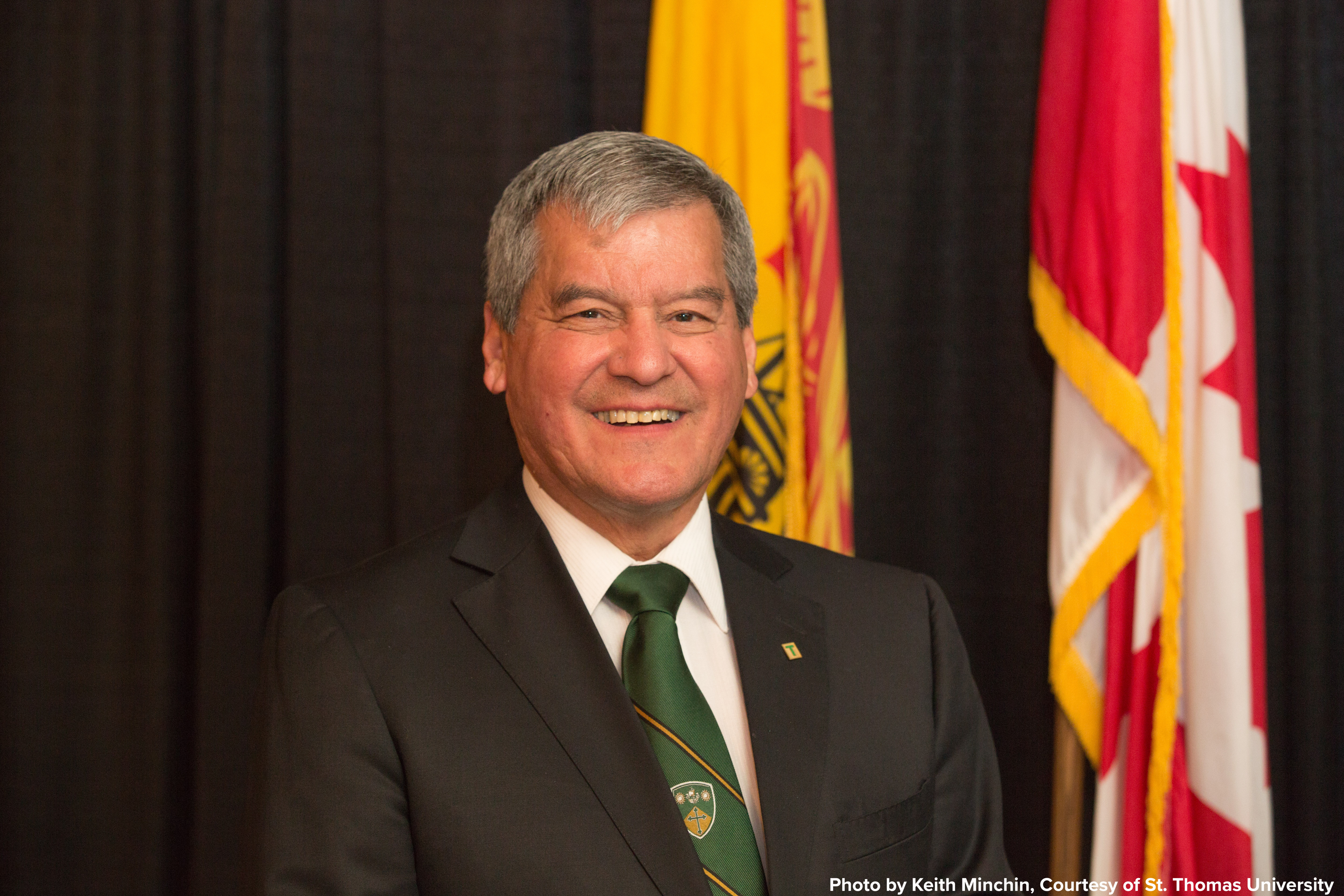 Tobique First Nation and Old Government House, the residence of New Brunswick’s Lieutenant-Governor, both lie on the banks of the St. John River. Connected by 180 km of flowing water, the Maliseet reserve and Fredericton’s viceregal estate share something else in common: they’ve been homes to Graydon Nicholas.

The Honourable Graydon Nicholas has led a career marked by firsts—he was the first Aboriginal lawyer in the Maritimes, and then New Brunswick's first Indigenous judge and lieutenant-governor. In 2020, he became Chancellor of St. Thomas University.

But before these many accomplishments, his life was shaped by the St. John River, which rises in Maine and Quebec before flowing down the length of New Brunswick into the Bay of Fundy.

The St. John and its tributaries are the heart of the Maliseet homeland. Nicholas explains that the Maliseet call the river the “Wolastoq”, which means the “good river” or “beautiful river.” In turn, “Wolastoq” is the root of the Maliseet’s name for themselves: “If you look at the name of our people, ‘Wolastoqiyik’, it means ‘the people of the good river.’”

The river first marked Nicholas in an incident worthy of a David Adams Richards novel. He was born two months premature in January 1946, when his mother fell through the ice at the confluence of the Tobique and St. John. The mixing currents had made a false freeze, and though help arrived to save her, the shock triggered an early birth.

Nicholas recalls, “I wasn’t given long to live. There wasn’t much for premature babies then, but my mother prayed a lot. I wasn’t retaining any fluid, but a new doctor in the area said that I needed salt. So they fed me broth from barley soup, and I survived”.

Nicholas only learned that story in adulthood, but he’s been drawn to the water all his life. “I was nearly born in the river, and loved the river, and grew up by the river. Rivers, brooks, streams—anything that has a little bit of a current because there’s always a breeze, and that means the river has oxygen.”

During his earliest childhood, the St. John and Tobique were more forceful—and treacherous— than today. But as dams rose, the waterways slowed down and the contours of the rivers changed. Some small islands disappeared altogether.

However, the Tobique Dam also extended the reserve’s hockey season. “Between the dam and the St. John River, it was what we called dead water, and the ice was good there. We’d go down there at 9 o’clock in the morning, go home for lunch, go back down and play all afternoon.”

“You couldn’t shoot the puck, you just had to pass, because there were no shin pads and the goal posts were just two boots. Often we used a wooden puck, just a cut piece of birchwood. And some of us didn’t have skates!”

In the spring, the wetlands near Aroostook provided fiddleheads. “You’d pick them for food, but also for sale. The Americans would come over and gave us 10 cents a pound. As a family, you could pick 150 or 250 pounds at a time.”

The summers brought fish on the Tobique—“There were certain spots where the salmon would come up for spawning, and no kidding, the water was so shallow you could see their fins. The river was pure. Back then, you could drink out of the brooks in the Upper Tobique. Now, you wouldn’t dare!”

“There was plentiful fish, but no one paid much attention to the salmon. Actually, people liked trout—not very big, but tasty. You could make a little fire, clean the fish and cook it right there on the sticks. There’s nothing that tastes so good as cooking the trout over an open fire.”

Growing up, Nicholas heard stories connected to rivers and lakes of the region.

“Our language was never a written language, so there’s a lot of storytelling. Each season, there would be stories. You’d gather around the fire as kids. Some you’d repeat, and some you’d make up yourself.”

“The river was our highway, way back into time. And on the banks of that beautiful river, we had our encampments. And a lot of people would not remember this, but before the dams were built on the St. John, there actually were vegetables growing on the banks. I don’t know how they got there, but there were always growing. It’s a cultural and spiritual river for us.”

“Our people not only lived along the beautiful river and its tributaries, but traditionally our territory goes right to the side of the St. Lawrence River. With portages, you could get from the St. Lawrence to the Bay of Fundy.”

The river gave the Wolastoqiyik their name, and also their livelihood. “You would go inland in the winter because it’s easier to catch game in the snow, and in the spring of the year you would go to the water and live on the fish and the vegetation that would grow on the banks.”

Nicholas explains that the Maliseet traversed the entire river system and the vast lake network of Northern Maine through the winter, but each summer the whole nation convened on an island just above Fredericton.

“There is a place called Eqpahak, which used to be called Savage Island until recently. It means “where the waters end”, because that’s where the tidal water from the Bay of Fundy stops. It was a summer encampment. People who died throughout the year would be remembered at that site, there would have been new families formed. If there were new children born they would be brought to that place.”

“It was also where the communities would gather to talk politics, pray together. It was where they decided where the families would be dispersed to hunt game through the winter. They had to spread out to support the population.”

The Wolastoqiyik had such a close knowledge of the waterways that they could plan their winter migration routes and divide up hunting grounds by memory alone.

From his first days as a student to becoming a university chancellor, Graydon Nicholas’s career has taken many turns. He had to repeat grade one because of the switch from Maliseet to English, but by high school his strength in math and science led him to a science degree at St. Francis Xavier University in Nova Scotia, where he joined the Air Force reserve. After further military training and travels in the 1960s, he returned to New Brunswick with plans to become a teacher in his community. But when that job fell through, he enrolled at UNB’s law school at the last minute.

“Law school was a total immersion for me, but the methodology of thought in science helped me find solutions to questions.”

In the summer of 1969, he moved to Toronto to help research a textbook called Native Rights in Canada, the first of its kind. “We looked at the concept of Aboriginal title, Aboriginal rights, treaty rights and the legislative policies between Indians and governments and the Crown. This was an incredible experience that shaped me a lot.”

After finishing law school and a master’s in Social Work in Ontario, Nicholas went to work for the Union of New Brunswick Indians. His activism often meant hammering out environmental policy with government in an adversarial legal process. “We took on a whole series of hunting and fishing cases. I began to find out the importance of the environment, and how it affects each one of us.”

Not only did local farming practices and sport fishing affect traditional fishing grounds, but ocean contamination off the Eastern Seaboard hurt fish populations all the way to the upper St. John. In turn, Nicholas says that First Nations were often the first targets for blame when fish grew scarce, even if the true cause was pollution deep in the North Atlantic.

In his years of experience, Graydon Nicholas has seen the close connection between the health of river systems and the vitality of First Nations communities. He understands how deeply water shapes both a place and a people:

“Water is so important—all forms of life are important to us. Because there is a fine balance in creation.”
Tweet