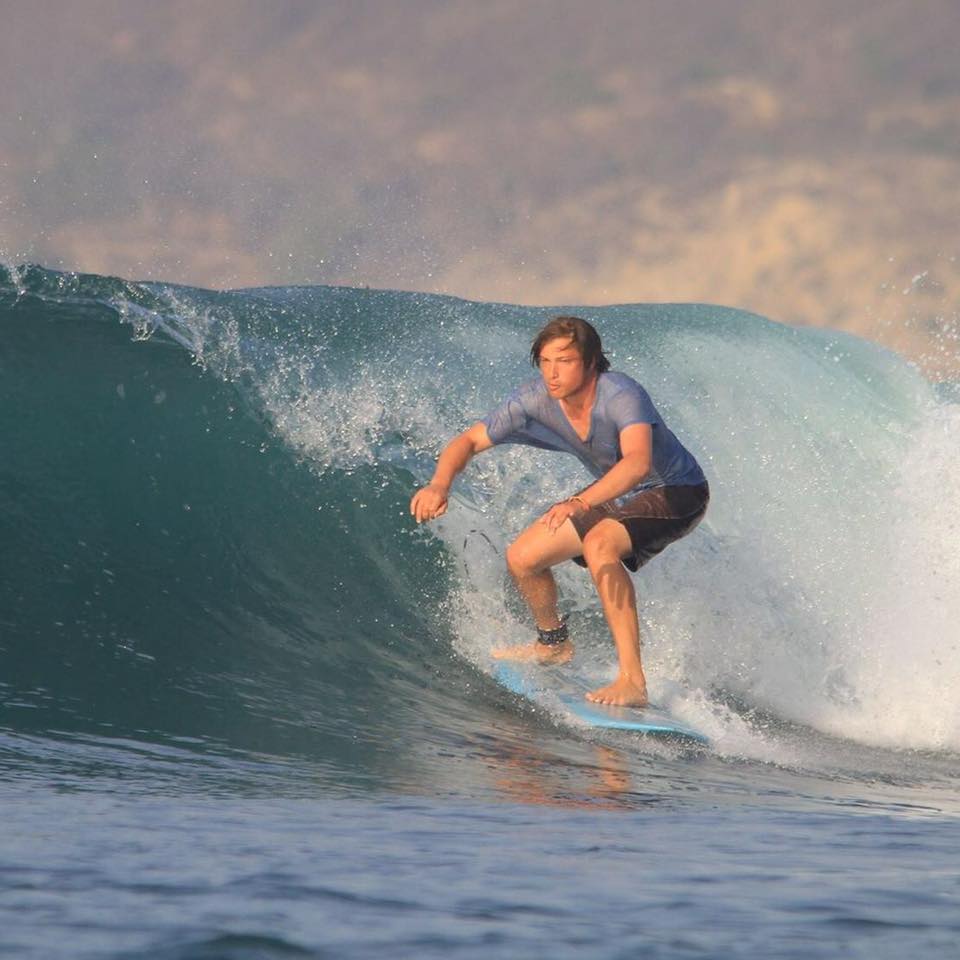 Surfing is number 1. Any chance I get, I will always look towards the water to see if there are any waves for me to ride. But I get up to lots of other things too. I like to swim and paddle.

I grew up in Toronto, and my parents had a cottage on Lake Simcoe. So I have always been used to jumping in water that was refreshing and wonderfully cold. I’ve always been drawn to the ocean, and so I made a point to go out and see some beautiful bodies of water and surf as much as I possible before I can’t.

I took a trip to Lombok , which is an island in Indonesia, close to Bali. There was a small surf town in Lombok, called Gerupuk. Where you need a motorcycle to get there. It seemed like there was no way for a village to be there but, soon you get onto a dirt road and a small little village- it’s a fisherman’s town. There were all these little boats with small little motors on them, and guys wrangling nets. It looked like a poor, but relatively happy place.

In the morning we woke up for a sunrise surf, and jumped on a fisherman’s boat, which was not wide enough. It was not even as wide as my body. Just sitting on this boat, as were driving on the calmest water ever; you can’t even imagine surfing there. So he takes us to what is called the ‘inside,’ which is a small little reef with lots of moss on it. It is relatively shallow, but super safe for beginners. It has a wrapping, on the right hand, and a pretty hallow left. When we got there, it was about shoulder high. The sun just came up over top of these islands that were just to the east of us.

I jumped in the water, and I remember landing feet first. Usually when you splash in the water, you lose breath, but not this time because the water was 31 degrees. I jumped in the water and it felt like I was in slow motion. Usually I paddle to the surface as quick as I can, but I kind of just breathed out and was super calm. It was the first thing in the morning, so my body should be shocked but I remember coming up and taking my first breath out of the water, and all I wanted was to go back under the water because it was so warm, and comforting.

I paddled over to the waves, and got dumped a few times, because I’m not a very good surfer. But I ended up figuring out where the peak of the wave was by following the locals and where they were paddling. I got led to a wave, which I rode on a board which must have been 6'10 feet. The board wasn’t easily manoeuvrable, but I remember dropping into this wave and dropping into this line when I was way ahead of the brake, and I just slowly put my foot on the back of the board and waited for the wave to come. The backwash just splashed me on the back, and splashed me right forward, back into the wave again.

I remember looking at other people and thinking, “Are you seeing this? Is anyone else watching this?” I couldn’t believe it. It was the best wave I’ve ever gotten, at that point in my life. I just remember coming out onto the top of the wave, not letting myself go further. I probably should have rode it all the way in but instead I just fell on my back in the water, and I just sunk down. It was the same kind of feeling of being in 30 degree water. It was just magical. The sun wasn’t too hot, everyone was nice and friendly, and it was the best wave I’ve ever had. It was the first time I felt the force of water dictate and put me in the water. This happened 3 years ago and since then I have been travelling around the world surfing.
Tweet

Event
Clean Up and Launch Event - BESIDE Magazine