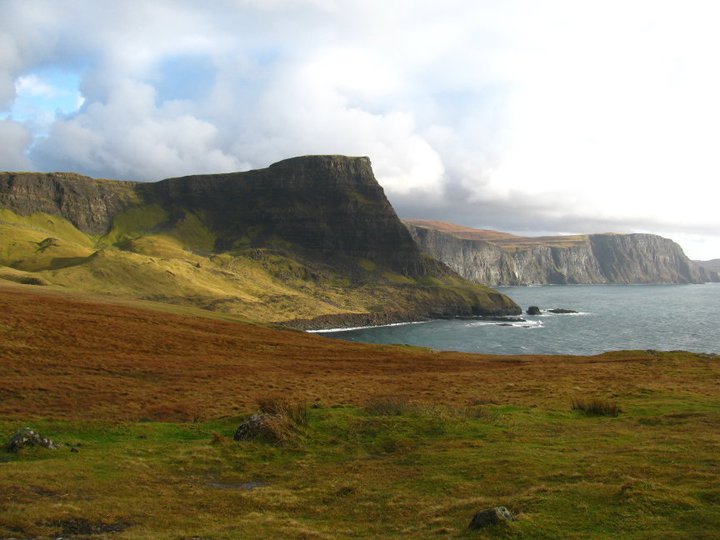 My Watermark is the Atlantic Ocean in Scotland.

Water has always held a great significance in my life. Not solely because life cannot survive without H2O, but rather because there’s no greater feeling than being close to a body of water, or better yet swimming in it.

I was twenty-one when I moved to Scotland on a working holiday visa. I recall walking up the cobblestone streets of Edinburgh, overflowing with tourists, dim pubs, narrow alleyways, the skyline of a pointed gothic tower, fortress of a medieval castle, and the rocky formation of an extinct volcano, high above a distant view of the sea, beyond the contrasting buildings of Old and New Town. I was living in one of Europe’s most enchanting cities, surrounded by history, exploring a lively culture, connecting with new friends from around the world. Yet I felt misplaced. This was the first time I had wandered away from home alone, in a city where I knew no one before arriving. Edinburgh’s crowded summer season became tiring, day-trips to the beach and the search for quiet green space wasn’t fulfilling the adventure I had left home for.

I traveled to Northern Scotland, following the Highlands west and crossing over on a ferry to the Hebrides. These small island communities, made of single-pass roads and stone cottages built close to the sea, were occupied by the warmth and dry humour of the Scottish locals. I had to tune my ears to decipher the heavy accents. There was something magical about this part of Scotland. I can pinpoint moments when no other person seemed be around for miles, I was lost in the lush green fields and hills, scaring away the sheep with the skip in my steps. The most powerful feeling in the world (I’m slowly exploring as much of it as I can), is standing on the high cliffs in Scotland, overlooking the North Atlantic as the cold wind freezes over smiling cheekbones, the waves crash into the rocks below and seabirds soar through the moody, grey sky above. On these isolated shores of Scotland, I found myself alone and in love with the
ocean’s wild presence.

The ocean covers 70% of the world’s surface and contains about 97% of the Earth’s water. There is so much of the ocean we hadn’t yet explored and so much that is changing. The ocean is warming, absorbing increasing amounts of carbon dioxide, fish in some areas are being caught beyond their capacity to reproduce, and as the coral reefs are dying and sea levels rise – I wonder how these changes will alter our dependency on the ocean. I never want to lose sight of that spark of inspiration I felt overlooking the Northern Atlantic. It formed a deep bond to a source much greater than my tiny footprints. Scotland is like a second home, a place I’ll always return to, replaying that connection with the ocean like a broken record of my favourite tune.
Tweet